Everyone tells me that there is no possible way that Thoresen could be Z because he died in June 1970. I never said he was Zodiac, and I don't believe that he was. But I do think he could have played a part in the Stine murder. I'm still trying to piece it all together, but my theory is that Thoresen and Zodiac met in the Presidio area and Thoresen invited him back to his mansion to party. Thoresen would often invite strangers from the Presidio back to his mansion and would party until the sun came up. Kjell Qvale, also referred to as Mr. X, could have been friends or acquaintances with Thoresen given their love of cars and horses, and they lived 9 blocks from each other. I have said many times that I believe Qvale hid Zodiac in his home after the Stine murder, which was just a few blocks from Qvale's home and exactly 1 mile from Thoresen's home.

Call me crazy, I really don't care, but Thoresen being a complete psychopath and living that close to the Stine murder scene makes me think he could have been involved. And maybe he wasn't, but anything is possible.

Here is a map showing Thoresen's home at 2801 Broadway and how close he was to Qvale's home on Jackson. 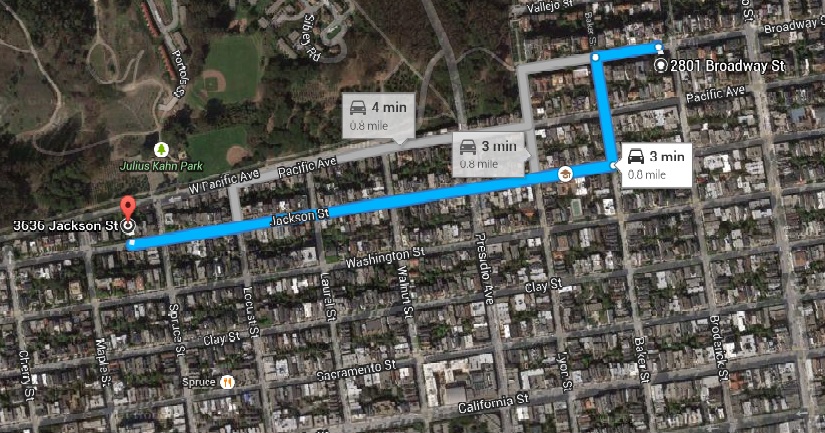 Thoresen had a falling out with architect George Livermore, whom Thoresen had hired to remodel the Thoresen mansion on Broadway in San Francisco. Thoresen refused to pay Livermore's fee. He hated owing people money. In fact, he had once broken a waiter's arm over his bill being 75 cents too high. What's 75 cents to a millionaire?

If Thoresen was Z, which, again, I doubt, could he have been trying to frame Livermore somehow? The Livermore family owned at least three homes on Vallejo St. in San Francisco. Zodiac attacked two couples just outside of Vallejo. George Livermore lived at the corner of Washington & Cherry in 1966, but not 1969. Thoresen probably did not know that he had moved as he was busy being a nutball and dealing with his trial preperations as well as travelling extensively. Livermore has a lot of ties to things that could actually make him a good Zodiac POI. Did someone do this intentionally or is it pure coincidence? I say coincidence, but I think that every single thing needs to be looked at in this case no matter how stupid or insignificant it may seem.

Could George Livermore have been the Zodiac? I don't know. He may have been a little old, but he was in great shape his entire life so he may have looked younger than he was. I have never seen a picture of the guy and can't seem to find one. If I did see one and he looked like a good resemblance to the Stine sketch then I might just do some real digging on the guy.

Nobody needs to tell me how ridiculous this all seems because I already know. But these are the things that nobody else will even consider looking into, so I might as well give it a shot and see what comes of it.

There are quite a few coincidental things I have come across when reading about George Livermore. One is that in 1920, his family sold their home at 1071 Vallejo St. to Isabel Stine, a co-founder of the S.F. Opera. Isabel Stine was obsessed with Japanese culture. The Mikado was an opera set in Japan. Was she a  possible relative of Paul Stine? George Livermore was heavily involved in the S.F. Opera as well. Livermore was a member of the Bohemian Club and all the other "big shot" clubs in San Francisco, and one of his brothers was a key figure in the Sierra Club. The Livermore family had strong ties to the town of Ross, CA. There are just a lot of coincidences, and I'm sure they are nothing more than that.

Berkeley's Bancroft library has... I'm not sure f it's a book or what, but it's a really interesting read.
http://digitalassets.lib.berkeley.edu/roho/ucb/text/livermore_george.pdf

yous hould make a thread on george livermore, he seems like a pretty good POI imo. coincidental things are usually just that but when they start to add up you get a good suspect. arthur leigh allen is proof of that

No way. I see what you're saying, but so far there aren't really enough of these coincidental things to make Livermore a POI. Besides, he comes from one of the most prestigious families in San Francisco history, dating back to the 1800's. One of George's sons was a well known judge. One of his brothers was Ronald Reagan's right-hand man. I don't want to go down that road. IF George Livermore has anything to do with the Zodiac case then I think he could have been someone that was meant to be framed for the crimes. Being a member of the Bohemian Club is interesting, though. I could see a few of those rich snobs being bored and thinking up a character who kills people.

BTW, Kjell Qvale was a member of the Bohemian Club as well.