sandy betts wrote:I think that I am being misunderstood? No one but my granddaughter ever saw the picture of the body and the bat next to it and the cypher under the picture, that I know of? So that is why you didn't know about that.
She found it when she was looking up serial killers and just stumbled across it by accident. She was never able to find it again. The person who put it there must have removed it right a way?

That is some creepy stuff!! It would be cool to see the cipher. Somebody out there knows something about it and hopefully shares that information one day.

I watched Dr Phil the other day that I have recorded. John Ramsey and his son Burke were interviewed.
John mentioned he felt that the killer had some sort of revenge for him and killed Jon Benet to hurt him. That was something that I have always thought about that case and the Cheri Jo Bates case. He also believed that the killer was inside the home before they came home and waited for them to go to sleep. I think that was when the killer wrote the ransom note, intending to kidnap her , but later changed his mind. The DNA on her panties was saliva. I couldn't help but think again of my suspect. He has a uncontrollable drool out of the corner of his mouth.
John Ramsey said that would be the very last interview that he would do. I would like to send him the picture of my suspect, to see of he recognized him? His business was graphics and my suspects close friend/ relative worked in graphics at the print shop he worked at.
When I find the cypher that I was told was below her picture , I will try to remember to send it to you.

Do you have contact info for John Ramsey to send him a pic of your suspect?

Rocketman, I don't have that information, but I think I heard that he was living in Washington? Its probably not that hard to find him, I might look up Lou Smit who has worked the case and is very sure that it was a intruder who killed Jon Benet . Smit is in Colorado. He could forward the information and picture to John Ramsey.

Eric X wrote:ramsey was living in Michigan last I knew but that was a while back

Thank you, I that will help me with an address for him. 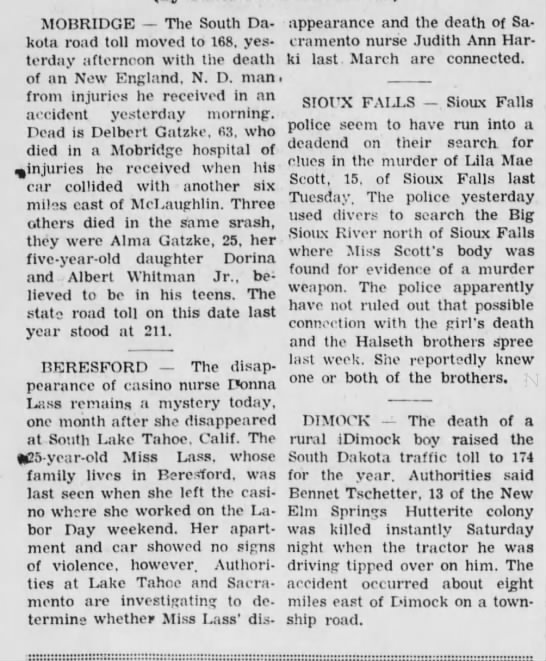 The first article states that Donna,was last seen leaving the casino. As far as I know that is not true. The second article tells that her sister Mary went to the apartment where Donna had lived the last time Mary saw her in August? From what I know , Donna had just moved into that apt. the day before she went missing.She was living with the Lowe's before that.
The unknown caller, is something that sounds like what Zodiac would do, including the call to Donna's employer.Thanks for those articles, they were new to me. I have seen many about her, but not from her home town.Again thanks. The 47th anniversary of her disappearance will be this year, some of us are planing on going up to Lake Tahoe in memory of Donna. Anyone except Zodiac, is welcome to join us.