Eric X wrote:I don't think the remaining letters are an anagram. they are probably nothing

You're probably right, but who knows.

Interesting about using a mirror. There is a old movie called "My Secret Weapon".( I think I have brought this up before?)It is about 3 codes sent to 3 people , they were decoded quickly. Then the 4th cypher came , but it was impossible to break. (Sound familiar ?) It was broken by holding it in a mirror. I often wonder if Zodiac saw that movie and got his idea from that movie? Zodiac did get most of his ideas from movies and books, he was not an inventive person, but he was clever.

Hmm, I'm going to have to see if I can find that movie for my collection. Sounds pretty interesting.

The first step in the Game being played to create the theme of the ciphers that is used for the key...

I know you've hear about this hidden map in Shakespeare leading to Acadia right?

Take the treasure map in The Tempest and find it in the Z340.......the first step to separating the items there.....

Should be easy....... he dotted it.......some of the dots are hidden inside the letters so be careful 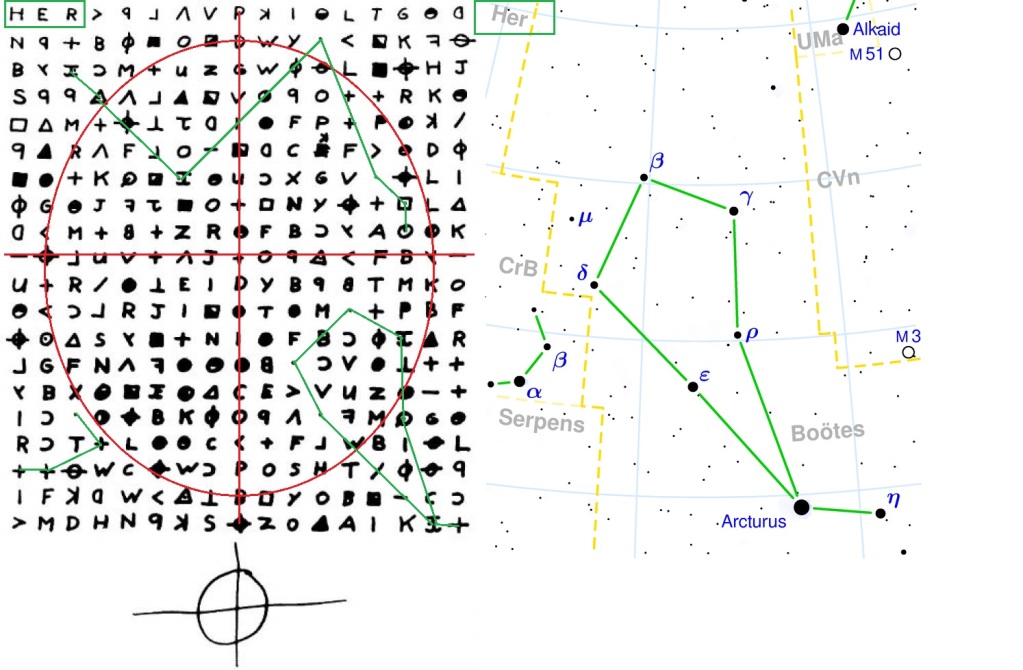 Its a constellation called Bootes.......or Arcturus

2)These first three characters......HER is abbreviated on this star map and shows the Quadrants in the Z340 ....

3)Taking these ideas the structure and mechanics of the Z340 can be revealed.

HER is short for Hercules, a constellation...

After the Star Layouts are found, HERCULES then is swapped this way to become HER CLUES

HER CLUE WRATH OF GOD is the first line phrase describing the Operation Wrath of God that Golda Meir (a female) created the motto for.....a signature she had crafted into letters, sent to the families of Arabs suspected of being a part of the branches of the PLO

When this clue is derived you notice that it is 25 letters.....almost a perfect alphabet length....whats the last letter of the alphabet,.......Z

So WEDONTFORGIVEWEDONTFORGETZ is the motto that is used for the entry into the vertical spaces in the first column of a Vigenere Tableau......

This produces a shifted series of letters, that create the Homophonic Alphabet of the Z408

This template is set for use in every one after that......the messages are found by taking the characters in the cipher, and locating the letter from the Z408 guides......then looking on the graph.....find the letter on the side and on the top that it corresponds to......

the crosshair is the hint to find the letter, to locate the crosspoint from the guides along the top...... 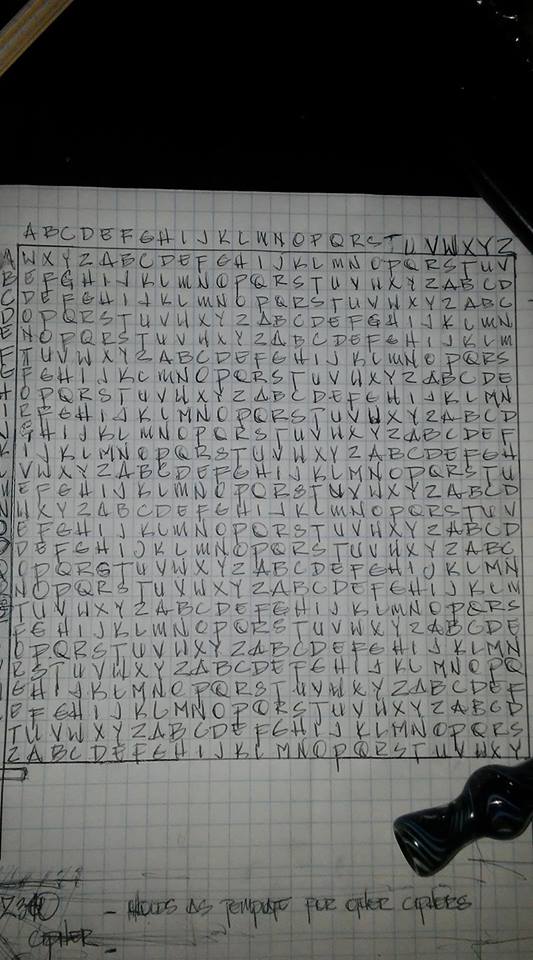 This system is the method that leads to breaks in the other ciphers as well.....

A True Zodiac letter will have the psycho front, the chilling similarities hinted, an underlying constellation, or overall quadrant mapped, and a hidden message that is derived using one of Francis Bacon's classic methods

These are then adapted into modern variances using guides and key words and key phrases to reveal the messages....

As is the case in all Steganography, a picture or image can be generated, to express meaning or locate points that are pre labeled, but the best cipher makers will not reveal a key phrase or any form of clues unless they expect you to follow them through......

This trail of breadcrumbs are not hypothesized in my works.....they are simple enough so an agent in the field could interpret them quickly and dispose of the evidence.

The cipher system continues throughout these letters and at times the shift to other areas was recognized through the different astrological mapping systems used...... 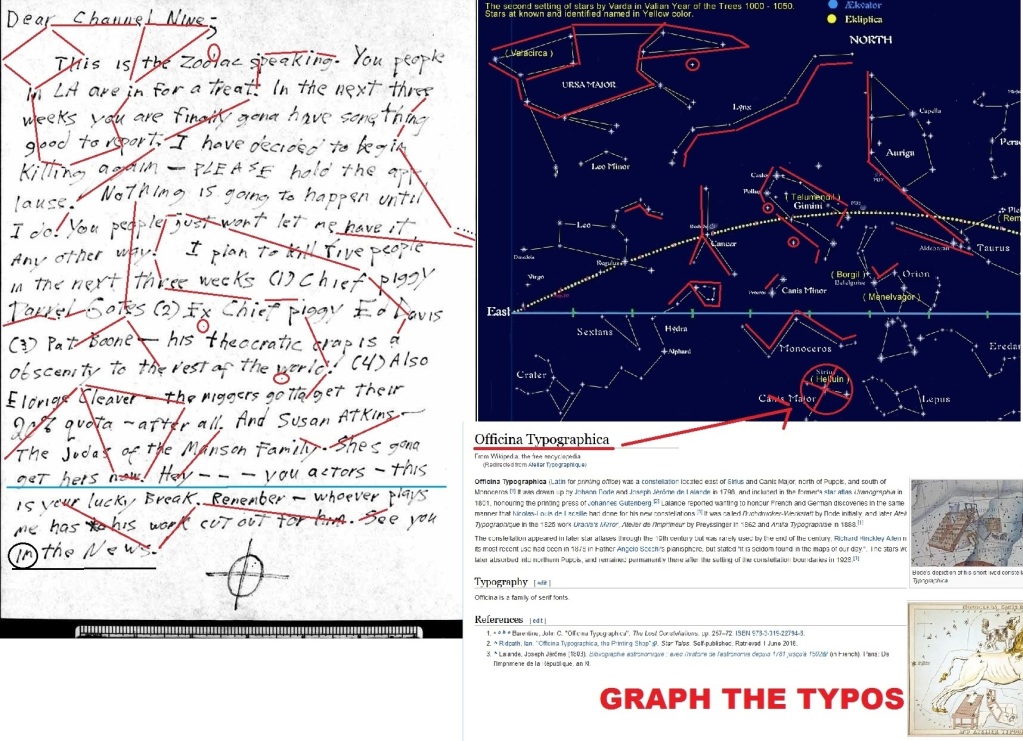 just like they did in the times of the Templars and the Rosicrucians under Bacon.....the ones who retrieved and hid the religious treasures from the Jews......

They always hint at their vengeance operations to remind people to not mess with Israel.....but they are going to be handed their asses soon enough....

They are now being drained like the swamp on Oak Island......

See the word Triumph in Trump? 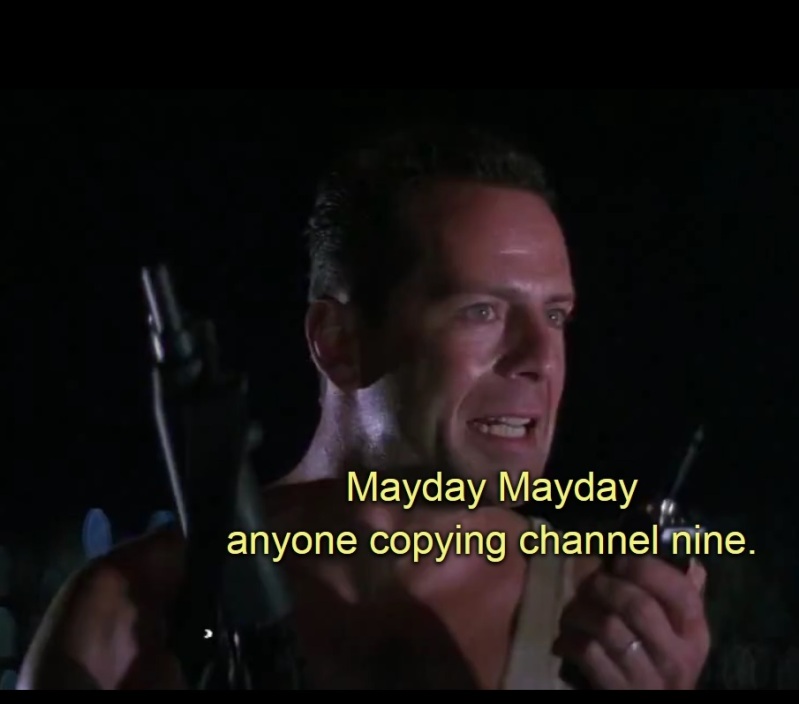 When you ride a rocket you dont stop......you show how each point carries over into the next cipher and how they work together to hold a template or structure to them....

Eldorado wrote:BEFORE I ATTEMPT THE PIT........

The first step in the Game being played to create the theme of the ciphers that is used for the key...

I know you've hear about this hidden map in Shakespeare leading to Acadia right?

When you ride a rocket you dont stop......you show how each point carries over into the next cipher and how they work together to hold a template or structure to them....

I was going to make a joke about Toledo (Rockets) football, but couldn't bring myself to do it. I actually like Toledo a lot...

Hi, I'm new to the site, but thought this would be a good place to start. I have a theory about what these letters say.
I'm going to give a walk-through, on how I came to my translation of them. And, an explanation for some of the letters.
It's the same method I use for similar puzzles, in word puzzle magazines. Just align the following letters, onto paper.

Explanation: I believe, with every fiber of my being, that the 3, ( 408 ciphers ), from July 31, 1969 were never decoded correctly.
I recognize, many, things in them. As such, I have done my own translations. It can seem complicated, at first.

H: In the ciphers, he does take some letter fonts apart, to create a symbol, or sound. He sometimes, uses the bar across letter H as a dash.
Another character he does this with, is the Latin small letter g with a stroke. Code to create the g, is: 01E5 Alt+X
He uses the bottom portion that looks like this: Ꝋ  to signify the sounds and letters ( ing ). When you say, ing, you hear long e, so ( eng ) - as in English, applies.

B changed to V: These letters can carry the same sound. Example: In Spanish, depending where the letters sit in the word, B can sound like V.
This also applies to: В  Cyrillic small letter ( Ve ) or as we know it, letter ( V ).

Letter P changed to number 9: In the ciphers, he does write letters in reverse. We see this in the ciphers: ᴐ This is Latin small letter, capital open O. He does use it as O and all
sounds and spellings of combined letters that give the O sound. Example: ( ou in bout or bouquet or ow in owl ). Because it looks like a backwards, C, he uses it to create sounds
that C can make. ( soft C in cinnamon - which also sounds like letter S, so S applies ), ( hard C sound as in cat, K as in kitten, CK as in deck ). Potentially, letter Q, could also apply,
but he uses a different symbol for Q.

Letter I, turned into a Y in the name, Levy: I and Y, can sound the same. ( spaghetti, lovely ). He does take it further in the ciphers and applies the letter and sounds of E.
Letter I, and letter L: ( l = Latin small letter dot-less ( i ) ). It also looks like our own lower case L, and often used like that in other Latin-based, languages.
It's also the Greek, upper and lower case letter, Iota ( l ) - letter, I.

Back to the word, Levy. It's a last name. ( Dr. David H Levy ).
Dr. Levy, along with Eugene Merle Shoemaker and Shoemaker's wife, Carolyn, had co-discovered a comet. It was named: Comet Shoemaker–Levy 9.
Supposedly, it was discovered by them on March 24, 1993. I believe it was discovered by them, much sooner and like a lot of scientists are known to do, they sat on the
discovery to keep grant funds, rolling in. It did break apart in 1992 and the pieces collided with Jupiter, in July 1994. That data, provided the first direct observation of an
extraterrestrial collision of Solar System objects. If you are interested, you can watch that impact on You Tube. It is pretty amazing to see.

I still have a lot to say about the ciphers, so I will be posting that, in the appropriate thread. 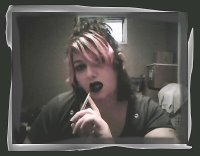 Very cool stuff. I hope you will post more.

ophion1031 wrote:Very cool stuff. I hope you will post more.

An investigation is under way now thanks to the reports that I have been making.

Was just called by the Kenilworth IL police detective assigned to the case of Valerie Percy's murder.

They were ordered by the Courts to investigate my leads in a report that I sent to a presiding judge to appeal her to take note of the suspects and their MOs, and were open to the information when they got it, inspiring them to move the case forward under the direction that he killed her, and then fled to Riverside, connecting the two sets of murders and will open a new chapter in the Zodiac Investigations. FBI in VT have informed me personally that they are also well informed about these reports.

They are watching this by the minute to see what moves he will make and hopefully some media will step up to take an interview down.

It's all to clue you into the star maps hidden in Shakespeare, and to make you look for them in the matrix of the Z340. This then clues you into segregating the Z340 into numbers and letters/symbols and then to arrange the 17 letter long lines into a relaid system of 18 letter long lines, leaving one letter out at the end.

The read phrase of the 18 letters is an Anagram, telling you to look for them in the final resulting phrases of the Z340. The phrase breaks down like this:

BEFORE I ATTEMPT THE PIT, READ THE TEMPEST

In the works of Shakespeare is a Biblical Tale about a treasure that was buried with a set of clues encrypted hiding a map to a location of a bottomless pit, that concealed something very important was brought. The Zodiac begins the Satanic theme here using the knowledge of this Masonic Secret to lay a curse over the people by removing any knowledge about this subject and the location of it being in Acadia....present day Vermont. He then kills and leaves the clues behind from this secret so only the Masonic Orders will recognize it's craftsmanship.

The use of a word rearrangement and the repetition in the use of the words shows also how they have a similar composition and can be altered slightly using the other randomly inserted letters, making up the phrase from the combination of the two of them.

The cipher then begins to create it's own legacy with the use of the tales of the Gods, showing that this is the tied to older legends like the Labors of Hercules, and the Wrath of God theme takes hold for the first line of the Z340. HER CLUE WRATH OF GOD

These are textbook examples of the use of Bacon's encoding methods as described in the Advancement of Learning, and is sacrilegious to have used these themes to conduct killings as fronts for bigger conspiracies tied to "Project Monarch"

These were ciphers that featured the use of encoded key phrases and the use of shifted Vigenere Tableaus that formed the repeating and random selections of alphabets in a Homophonic Cipher.

To see this all played out in a scientific breakdown is one thing, but to see the people doing it repeat it over and over again in each operation since then is even more compelling as a breakthrough