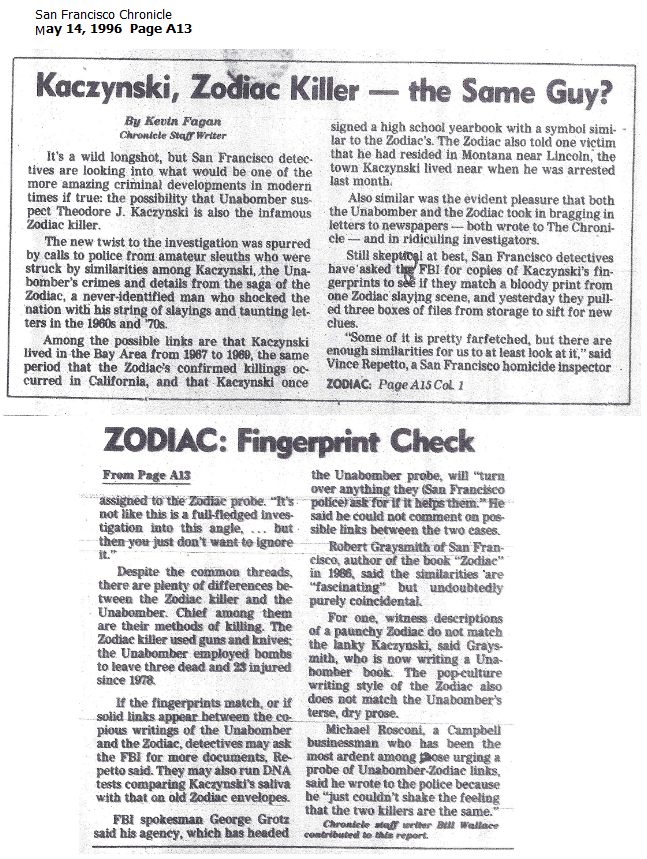 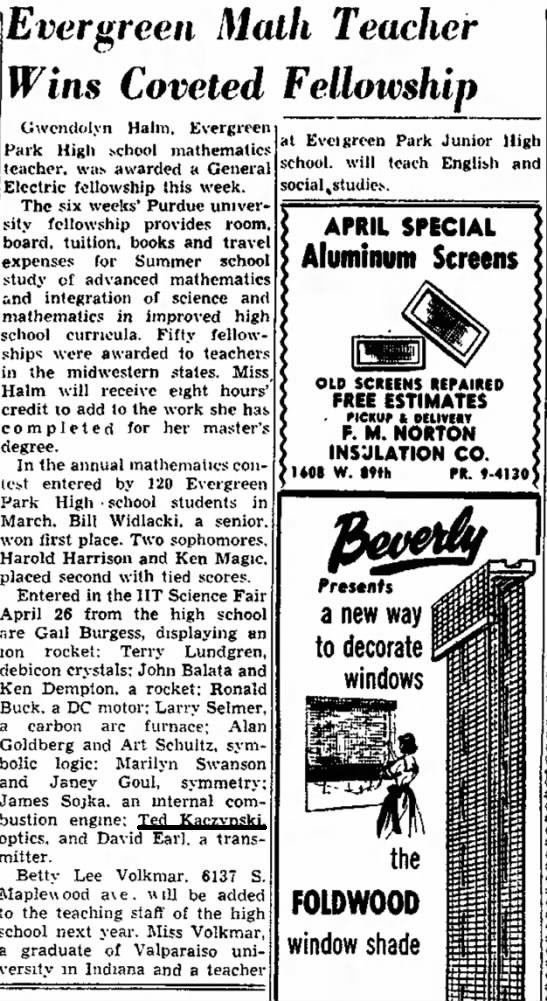 Thanks! I always love to read up on Kaczynski, Zodiac or not I find him really interesting.

ophion1031 wrote:Thanks! I always love to read up on Kaczynski, Zodiac or not I find him really interesting.

There are definitely some good reasons to like Ted for the Zodiac murders... his handwriting, especially when compared to the Belli letter, is pretty damn close. He had a mask in his cabin that wasn't all that dissimilar to Zodiac's hood. His usage of codes. The fact that he wrote anonymous letters to newspapers. All that among other things do make him a good suspect. BUT, he doesn't fit the Stine sketch at all. I guess you could say he slightly resembles the LBS sketch, but nobody knows if that sketch was of Zodiac or not. It could have just been some random pervert at the lake that day. I personally don't think that Ted was Zodiac, but the reasons I mentioned that make him a good suspect could also mean he was a partner or member of a "team." Some people have a problem with that because he was antisocial. I think it is completely possible that he could have worked with a friend or two and provided the bomb diagrams and ciphers.

I like Ted K as Zodiac a lot, but what do I know? Some people say Ted waz a "distance killer" and therefore couldn't be Z, who got up real close. But I don't believe that rules Teddy out at all. He could have experimented with different methods. Also, maybe nearly getting caught at PH may have made him rethink some things.
I'm not sure if Ted waz Z or not of course. And while I believe there waz no "Team: Zodiac" I'm not sure about that either. BUT I very strongly believe that if Ted turns out to be Z, he will have totally worked alone. Ted waz a big-time loner without any friends and is smarter than anyone he's ever met. The chances of him finding anyone he waz cool enough with to trust AND think they could carry out the dangerous, difficult Z activities are about as unlikely as finding a Trump voter at a Mensa convention.

That and nobody knows what kind of killer he would have been at that point. Maybe he wasn't a "distance killer" until later on. I can see why people would say Ted would have worked alone because a guy who is that smart would know that anyone else knowing or being involved in something like this would be very risky. But at the same time it is possible. Another thing to keep in mind is that Ted was a test subject in the MK Ultra experiments and someone in that whole thing may have forced Ted to kill, or write the letters or maybe just draw up the bomb diagrams. Maybe Ted came up with the ciphers on his own while in a "trance" and one of the MK Ultra big shots took the work and used it as the Zodiac ciphers. That is probably not the case at all, but there is always that small possibility.

I agree that those scenarios are possible. But like you said, "small possibility." Barring any weird anomalous-type situations, I can't see Ted K being a part of "Team:Zodiac."

I know a lot of y'all are not big fans of the idea of Teddy K being Z. However, just say IF he waz, don't you think he at least wrote the letters? What are the chances of TK and Fred Manalli teaming up and two guys having such similar handwriting? They were both white guys (maybe considered kind of ethnic back then) from Illinois, born in similar years who became professional academics (who would have expected Fred to be the more successful at that?). Ted waz so smart maybe he could have taught himself to hand write like Freddie M did. I'm kind of typing myself out of my own theory here (but just a little!). What do y'all think?

Similar topics
» Do you like that they brought back the Kitty Mask and Newspaper?