FYI my conversation with RPD

FYI my conversation with RPD

I say I found all the zodiac  victims items in 06 here and it had Cheri Bates stuff
the zodiac killer cipher 340  site printed it. and has sketches
Anyway I sent Riverside PD a large copy of the sketch of her school book store produced ( the art dept stamped the cover with their art ) Tablet  after 2-3 weeks I called RPD and was able to talk to a Det. Jim  he listened and when I got to saying her purse was in there and described it
( Thought it had to be her purse because it was with the other stuff and seemed like only a girl would have it and by the color ) Det. Jim asked me to again tell about it ,I did then sarted to go on but was stopped and again he wanted to know about the purse . I think the purse was not mentioned  but was taken  how could I know of it unless I had it in my hand ?
I won't tell what it looked like ,only for LE but/ except  the gold trim /plating was the same as other items belonging to her
2 days later at 8 am their time, he called back and was impatient wanting me to describe exactly where I found it , quickly I tried one way but he wanted it done from a landmark he told of and I was a bit unsure as to how far that was , also  a cop nearby was relaying what I said over another phone to KCPD, likely . I think he checked into the sketch and found it was that way or he would not have bothered with it ,but they tell you nothing , this was 2013

I did read the story on that site and saw the sketch of the book you described. Wasn't there a bunch of dried blood on the left edge of the book? Can you post a picture of the sketch?

I'll try to get a pic of it here  i need to see your tech section on how to  .
Yes the spine side was covered in coagulated blood IMO which means he stayed near the crime scene or returned to take her items
a jagged  yellowed fingernail imbeded in the cover,a loc of hair cut neatly  off and placed in the blood  and something very disturbing at the top which I think I should not say
plus I looked thru the tablet

A  girl mod at a popular  z site stated  that cheri,s boyfriend at san jose st.  was going to propose to her the weekend or two before her murder ,but she cheri wanted to finnish college  . In the tablet I looked at she had bad grades on 2 math problems the teacher writing a note asking what was the matter as she was always a above average to great student and asked her to tell him what was causing the bad work .  She got a E++ after that on her homework .   Was she pregnant?
And I will post the drawing Opinion

Hmmm that is interesting. I thought her boyfriend was going to San Francisco City College or San Francisco State or something like that?

Yes, you are correct, it was San Francisco State(SFSU now) 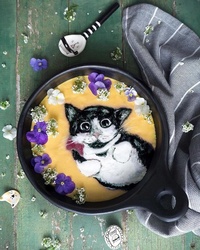 Similar topics
» Ideas that will; blow your mind!