Tony Tola's name appears in the 340 cipher with a crosshair right in between the first and last name. If Tony was Zodiac then this would be a pretty dumb move. A couple of other people have pointed out that maybe Tola knew Zodiac and Zodiac got a kick out of putting his name in the cipher so that the cops would investigate him. I dont think Tola makes an interesting POI but not much is known about him either.

ophion1031 posted on zodiackillersite.com that maybe there is a clue saying "to NY" "to LA" 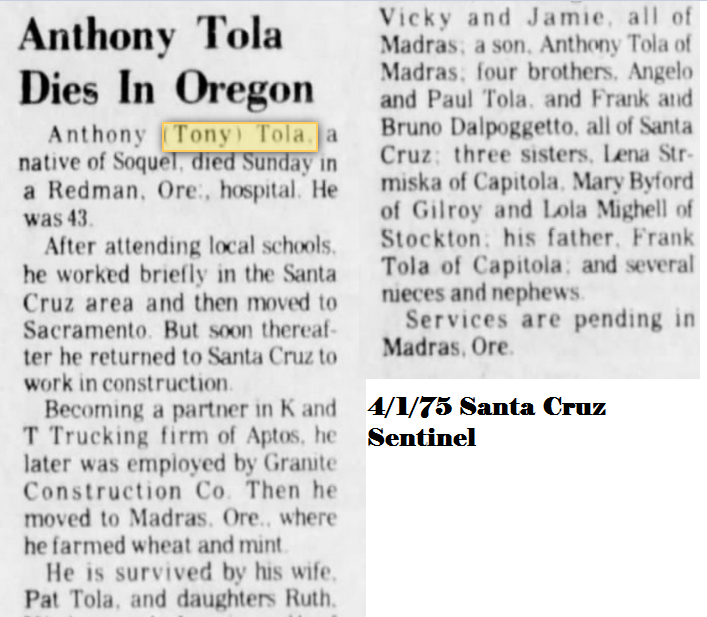 Ad another find by morf 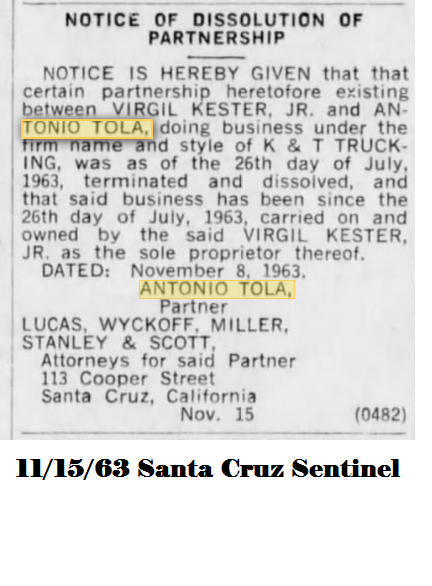 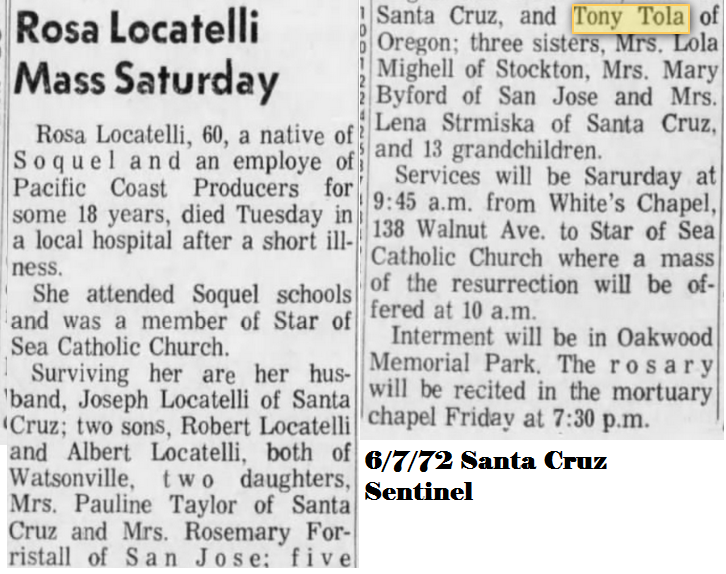 
The license of Antonio Tola of Soquel was put on a probationary status.
From October 13, 1952 Santa Cruz Sentinel.

"Something interesting, kind of. I was thinking that it is possible that someone put Tola's name in the cipher on purpose, to potentially set him up, perhaps. I was only able to find one acquaintance of Tola, a Virgil Kester Jr., who had a partnership with Tola in K&T Trucking. The partnership dissolved. Did they part on bad terms I wonder. Kester later partnered with a well known man from San Francisco who is a REAL ESTATE ATTORNEY. Possible tie to that personal ad." 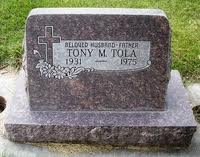 Thanks for starting this thread. Tola was most likely not Zodiac, but his name showing up like that in the 340 is very weird and worth looking into further. There's not a lot that can be found about Tola online, and the things that have been found are absolutely not interesting in regards to the Zodiac case. But if anyone else can find more info on Tola then please share!

Tony may have a brother (or cousin?) named Peter Charles Tola who is in his late 60's or early 70's. He has lived in Santa Cruz and Aptos. Probably not a whole lot of Tola's around there so I'd imagine they were somehow related. I will see if I can get in touch with Peter and see what he has to say. The name "Tony Tola" with the crosshair symbol right in the middle is something that shouldn't just be ignored, IMO.

ophion1031 wrote:Tony may have a brother (or cousin?) named Peter Charles Tola who is in his late 60's or early 70's. He has lived in Santa Cruz and Aptos. Probably not a whole lot of Tola's around there so I'd imagine they were somehow related. I will see if I can get in touch with Peter and see what he has to say. The name "Tony Tola" with the crosshair symbol right in the middle is something that shouldn't just be ignored, IMO.

I bet it is coincidental but you wont know until its proven.

I'm gonna do some digging on Tola's family and see what comes of it. Like it has been said before, maybe someone did try to set this guy up. Ancestry.com says his full name is Antonio Man Tola.

Paul Salvatore Tola (Tony's brother) was born approximately 1929 in Santa Cruz and died in Nevada. In 1957, Paul injured a man on a motorcycle when he was speeding and driving on the wrong side of the road and collided with the motorcycle just north of Aptos, CA. He also struck a parked car in 1951 and was cited for driving without due caution. Sounds like he was a bad driver. 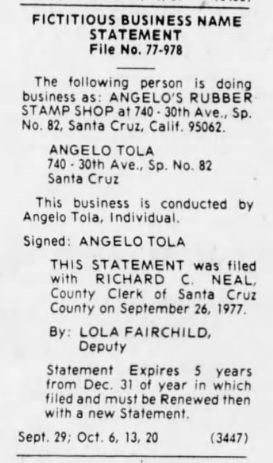 
This is all I have so far, but will edit when I get a chance to do more research. Being a pretty big family and all of them residing in Santa Cruz, I would like to see if there are any connections to Ross Sullivan. Since Tony and his siblings were all born between 1919 and the late 20's-early 30's (from what I have found so far), I would also like to look into their children, any who would have been old enough to be involved with the Zodiac crimes.

That address for Angelo's Rubber Stamp Shop is 0.9 miles from the address Ross Sullivan lived at in 1968.

1.6 miles to where Ross lived at the time of his death in 1977 the same year of the ad for Angelo's shop.

I wonder if Angelo opened the shop prior to this and this article was due to him renewing or what? It'd be interesting to see if the store was around in the late 60's, and if so, was it in the same location?

I wonder what this store sold and what services they provided for customers? Could this be somewhere Ross Sullivan would have visited?

Thanks for those distances, John. I was meaning to look those up, but I didn't think they were gonna be that close to either address for Ross.

Looks like Tony was the youngest of the Tola clan, but I believe he died before all of his siblings.

Now this is crazy............ the newspaper article that has Angelo's Rubber Stamp store was from the very same day that Ross Sullivan died.

So you are trying to link Sullivan to Tola or am I misunderstanding?