I don't believe that Dr. Swift was a member of the Minutemen himself, but quite a few Minutemen in SoCal did attend Swift's church and were close to Swift, so I thought he should have his own thread. There have also been rumors that Swift may have tried to have a man named Tommy Tarrants (he worked for KKK Imperial Wizard, Sam Bowers) assassinate Martin Luther King.

Wesley A. Swift (1913–1970) was a former Methodist minister from Southern California. In the 1940s, Swift started his own church, later known as the Church of Jesus Christ Christian.

He was active in terror groups, including the Ku Klux Klan, and developed a close friendship with prominent postwar anti-Semite, Gerald L. K. Smith. Because of the activities of Swift and associates such as Bertrand Comparet and San Jacinto Capt, Christian Identity increasingly became linked with extreme right-wing ideologies. Richard Girnt Butler, founder of the Aryan Nations, was a close California disciple of Swift.


This link has audio from a bunch of sermons given by Swift:
https://israelect.com/reference/WesleyASwift/sermons/ 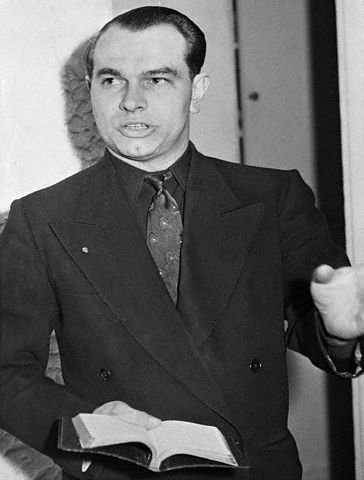 Here is a site that has some Swift stuff for sale... 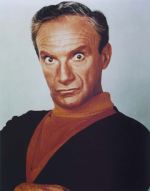 Wesley Albert Swift (September 6, 1913 - October 08, 1970) born in New Jersey, was a former Methodist minister from Southern California. In the 1948, Swift started his own church, later known as the Church of Jesus Christ Christian (Christian Identity) in Lancaster, California. That same year he spoke before the National Convention of the Christian Nationalist Party held in St. Louis, Missouri.

He was active in national groups, including the Christian Knights of the Invisible Empire, and developed a close friendship with prominent postwar anti-Judaist, Gerald L. K. Smith. Because of the activities of Swift and associates such as Bertrand Comparet and San Jacinto Capt, Christian Identity increasingly became linked with national ideologies. Richard Girnt Butler‎, founder of the Aryan Nations‎, was a close California disciple of Swift.

http://www.truefreethinker.com/articles/wesley-swift-jews-serpent-seed-satan-kkk-and-pre-adamic-race
Wesley A. Swift pertains to that which was chronicled in the article Serpent seed of Satan in British-Israelism, Anglo-Israelism and Christian Identity (http://www.truefreethinker.com/articles/serpent-seed-satan-british-israelism-anglo-israelism-christian-identity).

Wesley A. Swift (1913-1970 AD) was a preacher, Ku Klux Klan recruiter who became the “best known advocate” of Christian Identity and founded the Church of Jesus Christ Christian.

He concocted that which has been termed the “most distinctive doctrine associated with Christian Identity” which is “the belief that Jews are the direct biological offspring of the Devil”[1]—the serpent seed of Satan theory itself.
He attended Kingdom Bible College which is an Anglo-Israelite Bible school associated with Philip E. J. Monson’s Covenant Evangelistic Association.

He concocted a sci-fi version of the first chapters of Genesis that is still promulgated by many people; some without any, at least outward, obvious or known Christian Identity ties (some apply it within the context of “aliens” as demons or returning Nephilim, etc.). He appealed to an un-, non-, and anti-biblical pre-Adamic race, “each race had a distinct and different origin upon the face of the earth, as to time and as to the experiences by which they…came into existence, all of them apart of Divine creation.”

On this view, God created the “first creation of man” from “substances round about” and they became city builders. However, a “race of warriors, dark and curly headed” left the Earth in a “great fleet of space ships” due to a “war in heaven” which left Satan abandoned on Earth Thus, he and his “axmen and swordsmen” beguiled the first race created and “started to mutate species and mix races.”
This was a “Luciferian upheaval” that caused “the catastrophe that wiped out” most of the “first creation.” Due to the ruination, God created another man who, nevertheless, “succumbed to the Luciferian fallen archangel's dominion.” God “observed that there was no “Adamite” to “till the ground” but only the other races that were nomads and so God placed Adam in the Garden of Eden. The “beginning of the Adamic race” established God’s “household [upon] the earth.”

Of course, this leads to the serpent seed of Satan theory as he claims that Satan and Eve engaged in “sexual intercourse” and that thus, Cain is “the progeny of the wicked one.”

This results in two basic views of the origin of the Jews. They are of the serpent seed of Satan due to “the violation of Divine law by Lucifer and his intermingling of nefarious forces with the [pre-Adamic] races” which resulted in “black Jews, yellow Jews, red Jews, brown Jews” with Cain, himself, being “the first white Jew!”

Not surprisingly, this leads to conclusions such as that “there are no more crooked, evil, vicious people on the face of the earth” than the Jews because they are the literal “offspring of Lucifer” and thus, “a devil…species.”