It is with much regret that I announce the fictional nature of this thread but despite being factually non true, I had to post it for the want, wish and desire that it simply was! Mr Cameron, Meet Ronnie 'Certified Psychopathic three times' Kray...

"Good Heavens there my old chap, don't commit Homicide upon My person for, for....for One was privately educated and speaketh in the language of 'Toff'

Ronald Kray, an admirable Gangster looney. From His response to the accusation by the Crown Prosecutor in Court that He & Twin Brother Reggie were the Leaders of a criminal gang said: "Well, that may or May not be the case. But Your just a big fat slob" to His removal from proceedings for lunging at the trial Judge with a pen.

When He was given life with a minimum mandatory term of 30 years before Parole can even be considered the guard said He took Ron down to the holding cell where His co-defendants were and sat down and lit up a cigg. After a few seconds one of them asked Ronnie, who was first to be sentenced: "Well. . . What you get given Ron?" Ron looked back and said: "What did I get...fuck you mean what did I get? From where?" Co-Defendant: From the Judge Ron, Wa He give ya? Oh, You mean My sentence? He only gave Me a 30!" Ron shrugged, then continued chuffing on His cigg like Nothing had happened.

Yep, Ronald and Reginald were Twin Brothers who were like all other twins, You hurt one & You hurt them both. First time the brothers were given a custodial sentence was for putting a beat bobbie Constable in Hospital. Reg Kray had previous with this particular cop and one afternoon Reg and Ron were standing on a street corner when this cop Punched Reg in the neck from behind. Reg fell forward then turned around saying: "Corse Ron saw this copper hit Me and before I could retaliate I heard a Thud then Crack, and it was My Brother Ron knocking this copper out cold on with one punch. Then we both put the boot in to Him on the floor and I ended up having to drag Ron away before reinforcements arrived for the Constable. Ron was in a mad rage and kept kicking Him and shouting "Fackin Prick! Fackin hit My Bruva from behind you coward *Thud of another well placed boot going in*... "fackin Stupid Pig...." *Thud.* Fuck You!" *Thud*

Below, Left: Reggie, The tougher and sane Twin with His Twin Ronnie, who was a hard man Himself and totally nuts. 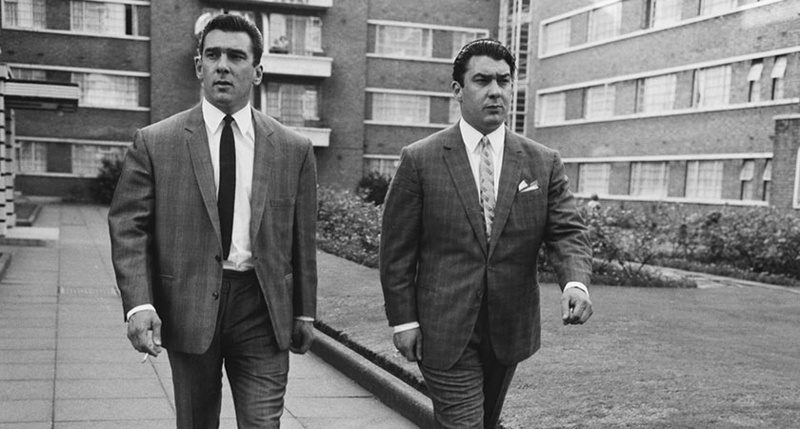 Anyway, getting back to Dick Head Dave....

"I would score a line from Drug Dealers, then beat off in My childhood bedroom..."

Hey. I saw that "Legends (I think waz the US title)" where one actor played both twins? That guy should of won an acting prize, if they're still having acting prizes. Anyway, I think there was some kind of video drama about the Kray Bros in the 80's where a couple of the wuzzies from Spandau (prison?) Ballet were starring as the Kray kids. Actually, that one song that got big here? It's not my kind of jam but I don't hate it. I mean, I'd rather hear that than the Eagles and that lot. I know this much is true.
Cheers!