General Observations relating to His style of writing.

General Observations relating to His style of writing.

In Zodiac's letters, Dr. David Van Nuys has analyzed the comments and statements made by the writer and interpret them, as He see's anyway as a qualified Psychologist, into a personality type or the type of Mind that would made such comments and statements in His co-authored and much recommended book 'This is the Zodiac Speaking: Into the Mind of a Serial Killer.'

So I won't go over that here. Here I want to point to the style of writing.

Zodiac always writes in unjoined single letter printing, usually with a blue felt pen on yellow 'Legal' type Paper. That's the image most will have of A Zodiac letter, Blue Felt, Yellow Paper, opening line 'This is the Zodiac Speaking...'

However, this is a trademark He did not begin with using. In the first letters, sent in three parts to three papers, The Writer fails to give Himself an Identifiable Moniker, writes His bragging admission along with the three sections of His code on plain white A4 paper, and does so with a black pen as seen here: 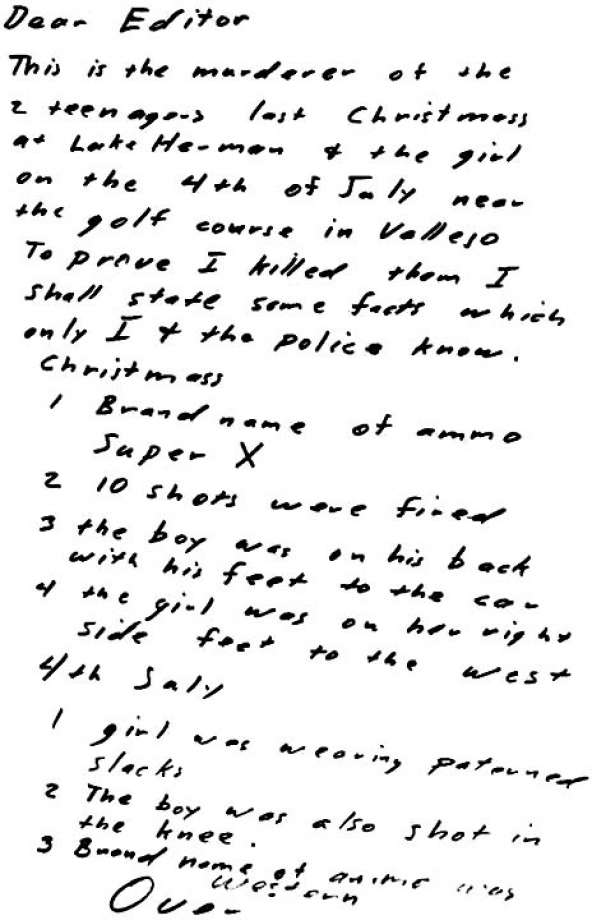 The Writer seems to have somewhat of a rule, maybe it's even a mild form of OCD that is causing Him to do this, where by He will only use blue in when writing on Yellow paper, and always and only uses a black pen when writing on white paper. He switches between using both throughout His writing campaign.

I have noted that when the writer uses White Paper and Black Ink, we see the right slant not only appearing in the formation of the alphabetical letters and formed words, but the slant off and down to the right takes hold in the overall way His letter is constructed as seen in the first of the two examples above where by the time He gets to listing points half way down the page to the bottom of it, the points starts out on the left and curve right downward as if an imaginary magnet is pulling each line down to the right.

This is a common trait and the thing that most expert use to say they believe the author is writing in His natural, not disguised, Hand because even when He makes a conscious effort to make the letter appear as neat with the lettering standing up vertical with no slant to the right along with the lines of message staying straight and not slant down off to the right, the further down the letter He goes, these unconscious habits take hold and He starts to fall back into His natural way of writing. The best example of this is His 'Nice Buttons' Letter which begins with a non right slant but 'Standing to Attention' vertical wording of 'This is the Zodiac Speaking' and the first few lines are clear that He is trying to maintain this accuracy and neatness but after only two or three lines in You start to see the trademark right slant as though each of the letters are about to fall over down onto the right side. As one Questioned Document Examiner noted, it's not as easy as you'd think to write in a non natural or disguised way and actually takes a lot of hard work for the brain which tends to lead to the writer falling back, in some way or other, into natural bad habits. He does, for some reason, seem to keep the lines or text themselves straighter than on Yellow paper with blue pen than He does on White Paper with black pen. I don't know having never used it Myself, but does Yellow legal paper have faint lines for text to be written on as I'm guessing that's how and why the lines are straighter on yellow paper. 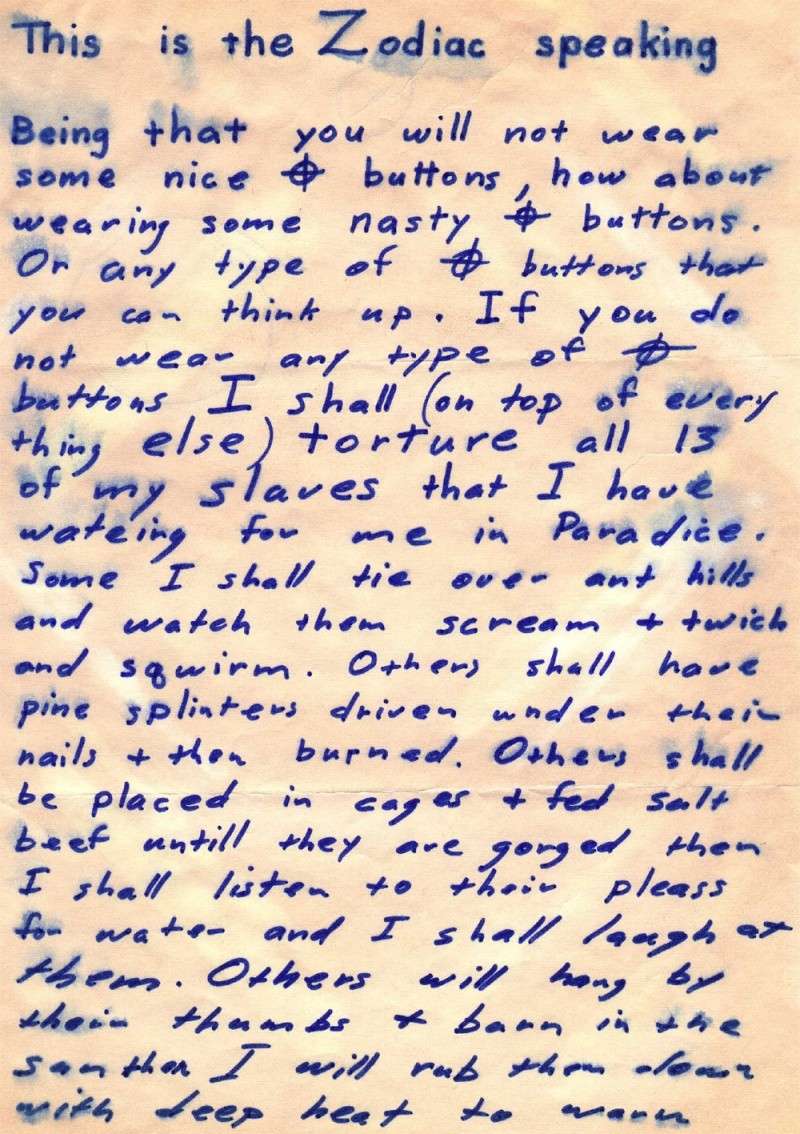 Re: General Observations relating to His style of writing.

Good post! I will give some opinions on this tomorrow when I have actually had some sleep. Not that my opinion means anything.