While re-watching History Channel's Hunt for the Zodiac Killer, the following frame caught my attention - 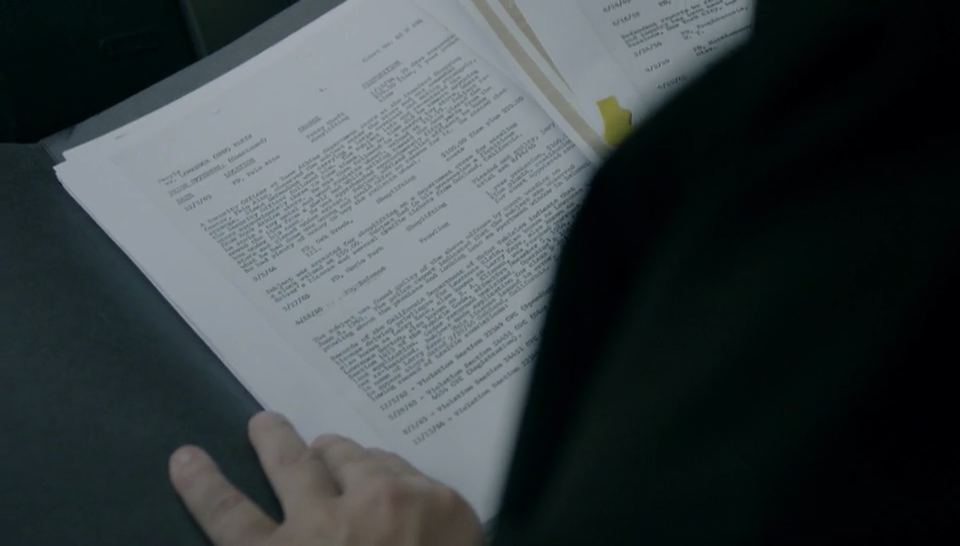 It appears to be part of a probation report dated from the mid-sixties. I've taken the liberty of transcribing the contents (the legible bits, anyway)...

12-03-1963, Palo Alto, CA – “A security officer of Roos-Atkins department store at Stanford Shopping Center, Palo Alto, observed the subject enter the store (…) Since subject was carrying a large overcoat and acting strangely, the security officer followed him. The subject left and re-entered the store approximately three to four times. At no time did he remove anything from Roos-Atkins. He was then followed to a nearby toy store, where he stole a toy model and wood roulette wheel. Subject removed the items from a shelf and while walking toward the door placed the items under his coat. He was apprehended approximately fifty yards from the store and placed under arrest. Subject advised police officers he knew what he had done was wrong and could offer no excuses for it. He stated he had plenty of money to buy the roulette wheel.”

09-05-1964, Oak Brook, IL – “Subject was arrested for shoplifting at a department store for stealing a clock valued at $50.00. Subject had in his possession a fictitious driver’s license and several traffic tickets from Oakland, California.”

04-25-1965, Belmont, CA – “Police report indicated that the subject was observed prowling about the premises and looking into an apartment window in Belmont. Subject was found guilty of the above offense by court verdict on June 3, 1965."

Hey Galaxy, very interesting stuff. Clearly the doctors who diagnosed Lawrence with a lack of impulse control, weren't understating his TBI symptomatics. Kane Himself says he didn't known why he decided to steal the items, admitting he has more than enough money to pay for them.

As for the History channel and My involvement, Bethany said bk when they were filming and producing the series that she has several investigators (2 from the original investigation) that she will act as an intermediary for myself and them if I have any questions I wished to ask. I think she was trying to offer me something back maybe bit I never asked her to put anything to them as Beth seemed to be in L.A one moment, then out of State in another etc so she was, as you would expect a producer to be, busy constantly.

She said in our very first communication She used to live in Wales, literally up the road from myself.

"Hmmm, haven't got no Director roles available for a fellow Welsh Beth by any chance. . . ". Lol Na didn't quite ask that.

Now you joged my mind tho G, I'll message her to ask about a possible second series & if She knows if it's commissioned by Hist. Chnl.

Beth Herself doesn't wotlrk directly for the Hist. Cnl.

Shes the producer for the company, Karga7, that makes documentaries that are then ran on that platform/channel.

S.A Klieman.... That's a new one? ? Is it meant to read Kleinerman, I've heard several Jewish families called Kleinerman, none Klieman that I can recall.