The big question is this... did William Thoresen really collect all of these weapons for himself, or was he running weapons for groups such as the Minutemen?


Valerie Percy was murdered in Sept. 1966 in Kenilworth, IL. Police found a bayonet in the lake behind the Percy residence, which they believe was the murder weapon. 3 months later, Louise Thoresen was arrested at Kennedy Airport in New York City. Bill and Louise had been all around the country buying up all the weapons they could. Bill was very abusive and controlling of Louise. He made her take some large boxes of weapons to the airport's lost & found for safe keeping. An employee of the airport was moving one of the boxes and a pistol fell out. They opened the other boxes and found an arsenal, so they reported to it the police who arrested Louise when she came back to claim the items. The Thoresen's rental car was searched, and the police found multiple weapons (including bayonets) and a large amount of ammunition. Police waited near the rental car for William to shop up so they could interview him about the Percy murder. When William showed up, he refused to answer any questions.

So, you got the FBI wanting to question Thoresen about the murder and then they find out he had bayonets, the weapon they believe had been used to kill Valerie Percy,  after Louise was arrested. William should have been arrested and held until he cooperated, but he was not. Some of the weapons seized were stolen government property. 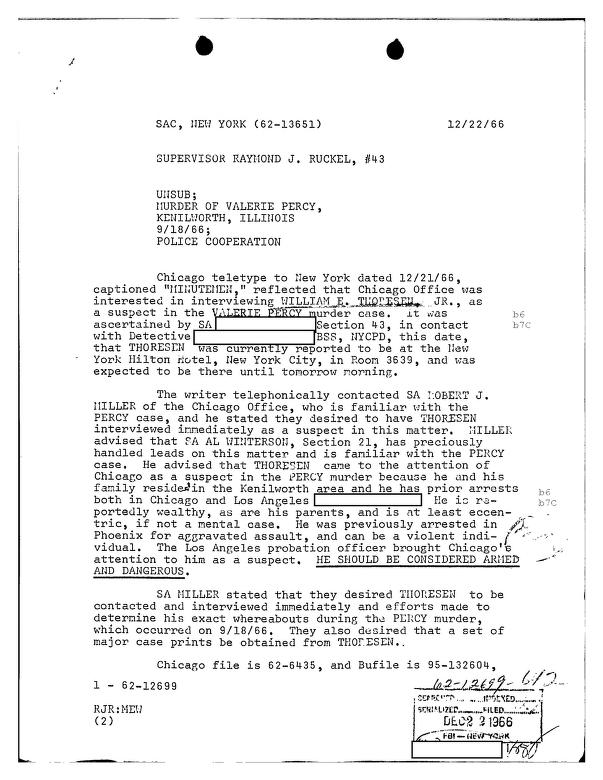 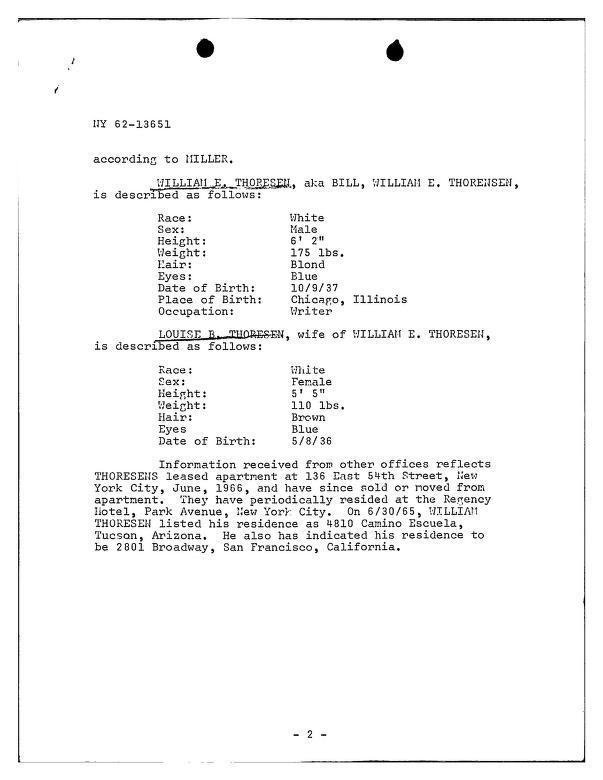 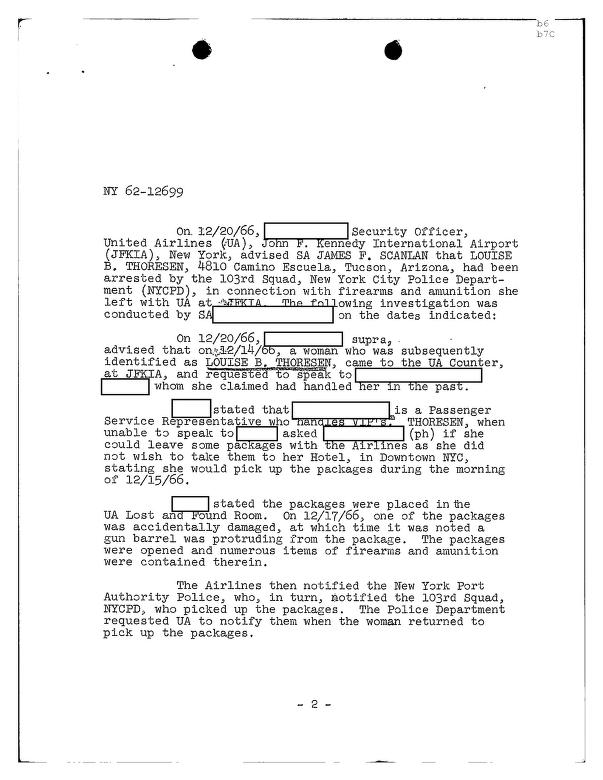 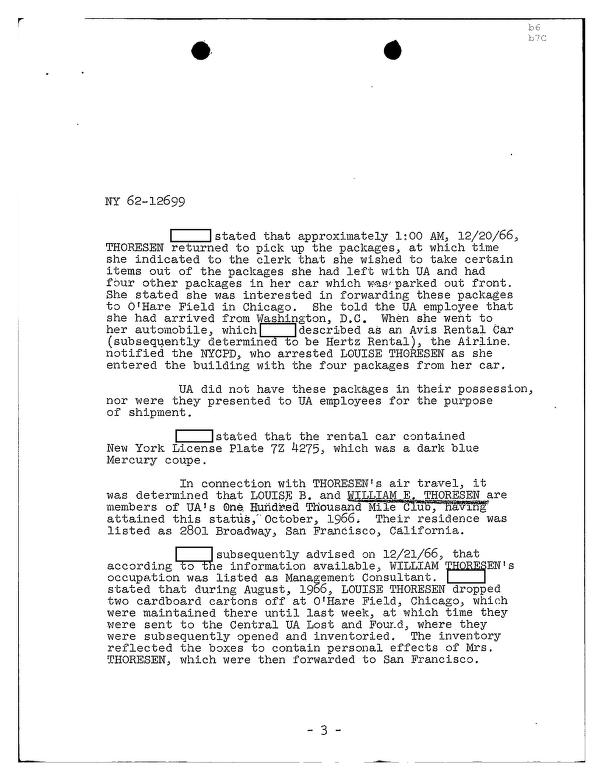 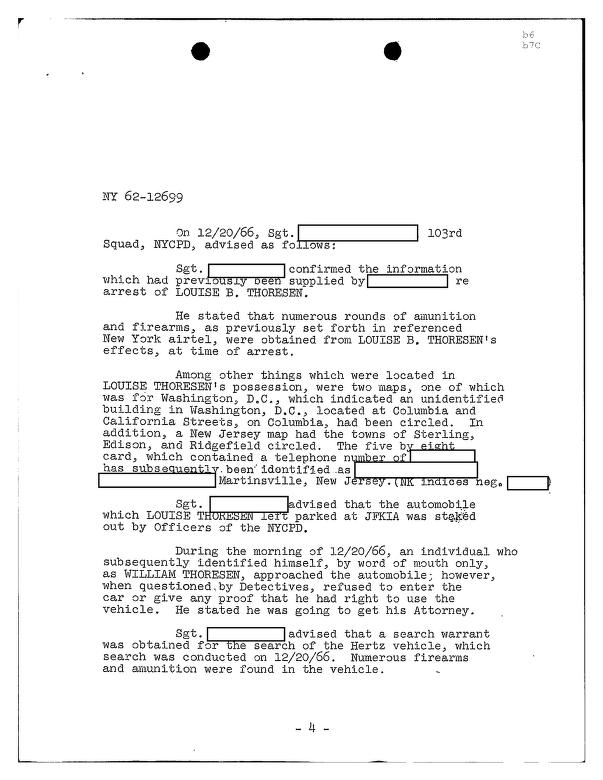 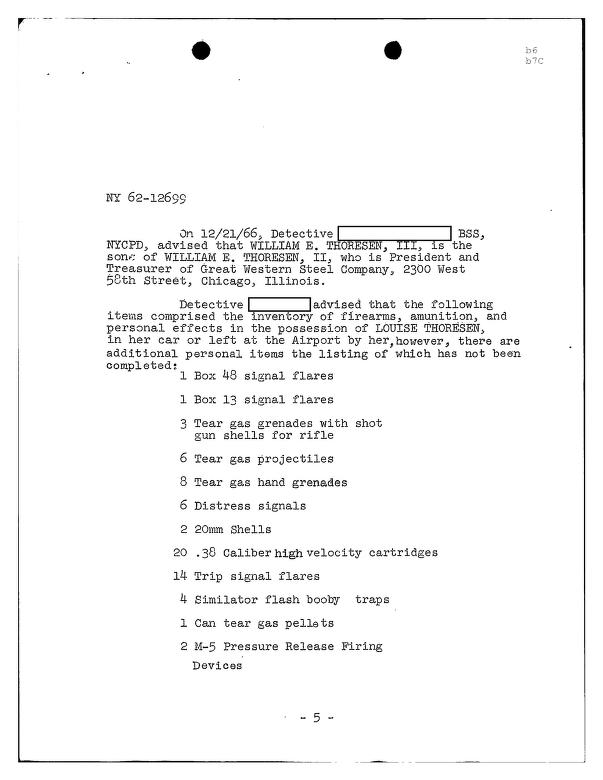 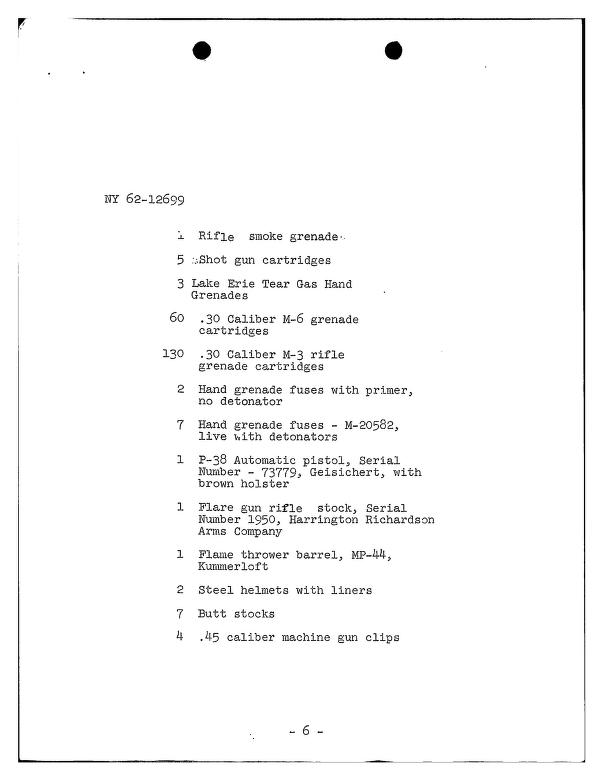 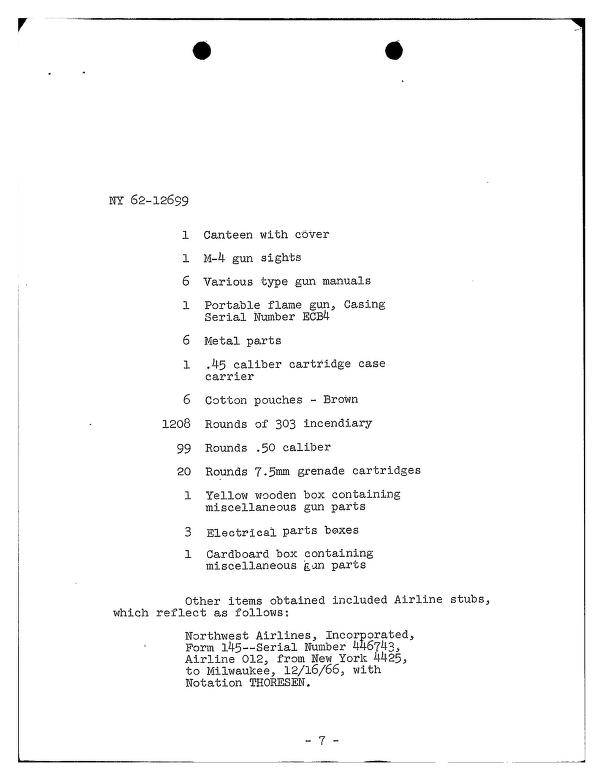 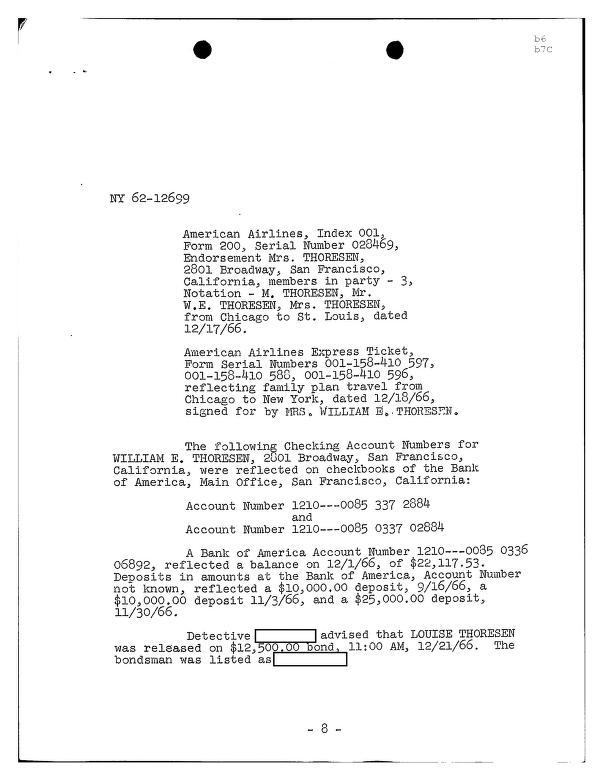 Now that is a serious amount of weapons, BUT that's not all. That is just what Bill & Louise had with them. While on their "shopping spree," William had made several other purchases of items to be shipped to him in San Francisco. The dumb ass has the FBI questioning him about a murder, and his wife has just been busted on serious gun violations, but he still goes out and keeps buying all kinds of weapons and ammo. He had even made a stop (at some point) at a Dallas gun shop owned and operated by one of the Dallas Minutemen who was most likely involved in the JFK assassination, but that's another story.

The bust at Kennedy airport also lead to a bigger bust. The FBI looked through luggage in the rental car, and in a briefcase that was in the rental car they had found papers on some of Thoresen's weapons purchases that were to be shipped to him in San Francisco. This would lead to one of the biggest (maybe THE biggest) weapons busts in U.S. history. My next post will be about this bust.....

The FBI had got word out to the Bureau of Alcohol, Tobacco and Firearms in San Francisco, and they, along with the S.F. branch of the FBI, set a plan in motion. I will have to find the date of when the Thoresen's mansion was raided. Nobody was home at the time the warrant was served, so agents went into the house and searched the place. Agents were shocked at what they found. I have to find a list, so I will post that later. Over the next few days, the agents had learned of other stockpiles that Thoresen had stashed in warehouses around the Bay area. He also had a cannon stored in a garage in his neighborhood. Yes, a cannon!! In all, the total amount of weapons and ammo seized weighed in at over 77 tons!

A 27 ton stock of small arms, grenades and ammunition belonging to Thoresen was seized at a warehouse in Berkeley - April 1967. 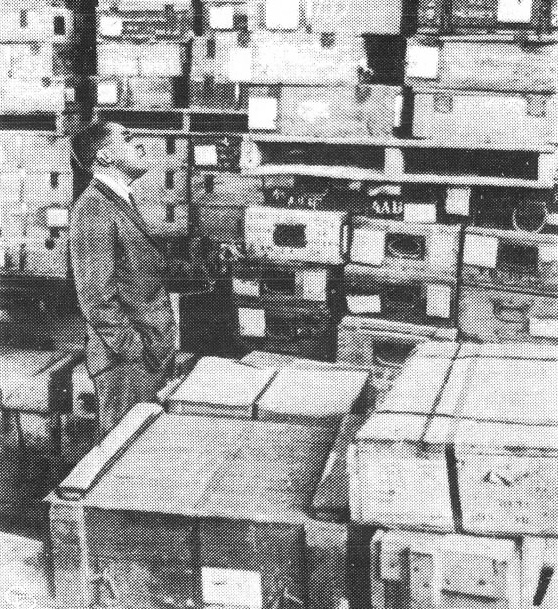 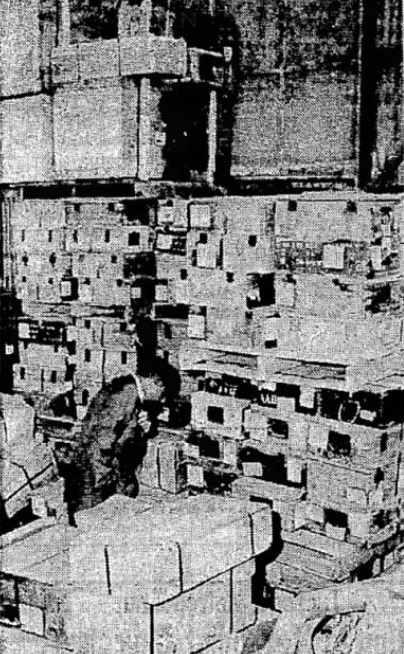 After the raid, the Thoresen's moved to Phoenix. William, who was already violent and unstable, really lost his mind in Phoenix. He would beat Louise more frequently and more violently. He increased his drug use, and Louise stated that she could tell that something was eating him alive. He would later confess to her that he had hired a hitman to kill his brother, Richard, and that he himself had killed the hitman months later. He also told Louise that he had killed other people, but did not mention any names or details.


A source of mine has told me that the Thoresen's had a pilot who would fly guns to Chile for him. I have also read that Thoresen may have had a handler by the name of Dr. John Philip Nichols. Also worth noting is that Dr. Sid Siemer, also a pilot, knew the Thoresens and Nichols and also flew to Chile quite often. I do not know if any of this is true. Another source has confirmed to me that Thoresen DID sell guns to the Minutemen. This makes sense to a degree. Why else would Thoresen keep stockpiling weapons after being busted and while he was on trial? If he really was "just a collector," then I think he would have gave up on that after all the trouble he had gotten into.

After Thoresen's death, police searched the home he and his family had been living in. It was a mansion in Fresno that William had purchased to live in while he and Louise were on trial (the trail was in Fresno). Police found another large amount of weapons as well as a large amount of drugs - more than 50 lbs of high grade marijuana and large amounts of LSD and heroin. Thoresen was supposed to leave for Europe later on the day of his death, and also had scheduled stops in Tangiers and Morocco. He was going to be taking this trip with an unidentified woman. Police believe that Thoresen was also moving drugs overseas. At Louise Thoresen's trial, a pathologist had testified that William had fresh needle marks on his right arm at the time of his death.

Federal investigators then searched the San Francisco mansion again to find even more weapons and ammunition, including 9 rifles, 3 shotguns, 2 pistols, 70 sticks of dynamite and 1 machine gun. They also found 7 slot machines in the home.

Outside of the Fresno home after Thoresen's death - ATF agent William Bertolani is holding a grenade in one hand and a pistol with a silencer in the other. 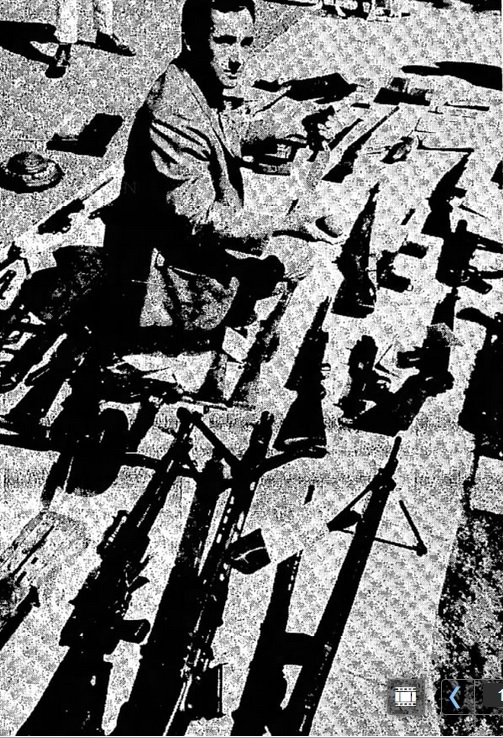 So I will ask again... what was this guy stockpiling weapons for?

Thoresen was charged with felony theft in 1959 for stealing 6 colored posters from a ferry terminal in Maine. This felony charge meant that he could not legally own a firearm. He tried to appeal the prior conviction in Maine before the gun trial began.

Hey Ophion, it's really nice to see that you have a section on Thoresen.  Even if he isn't Zodiac he's a very interesting study.

You will be interested in reading about J Curtis Earl who was the gun broker that got many of Thoresen's weapons for him.  In Louise's book she called him "Orval Lee".

As you know, I have tons of Thoresen stuff and will post it as time permits.

Seagull!! Thanks for posting. I have done a bunch of reading on J. Curtis Earl. He was an interesting guy. It's funny that he had a thing for Louise. Good thing Bill never found out about it haha.

Thanks for posting the link. I had read some of that before but not the whole thing.

PS... I am really considering writing a movie about William Thoresen.

F. Lee Bailey was one of Louise's lawyers during their trial. 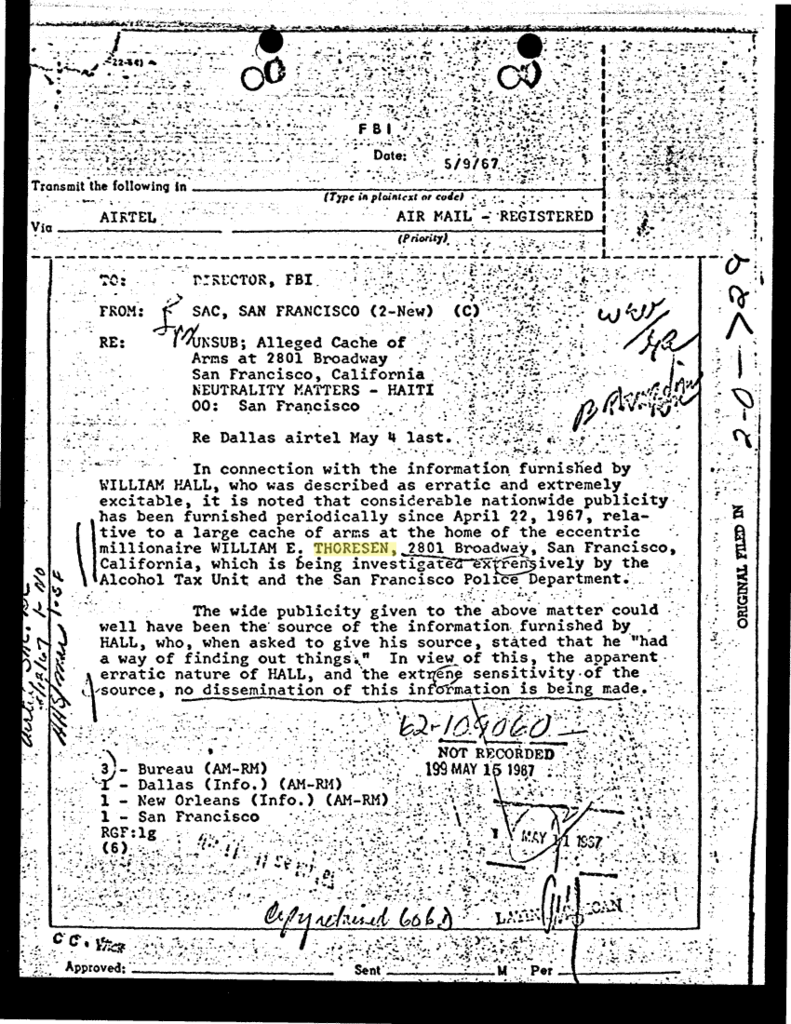 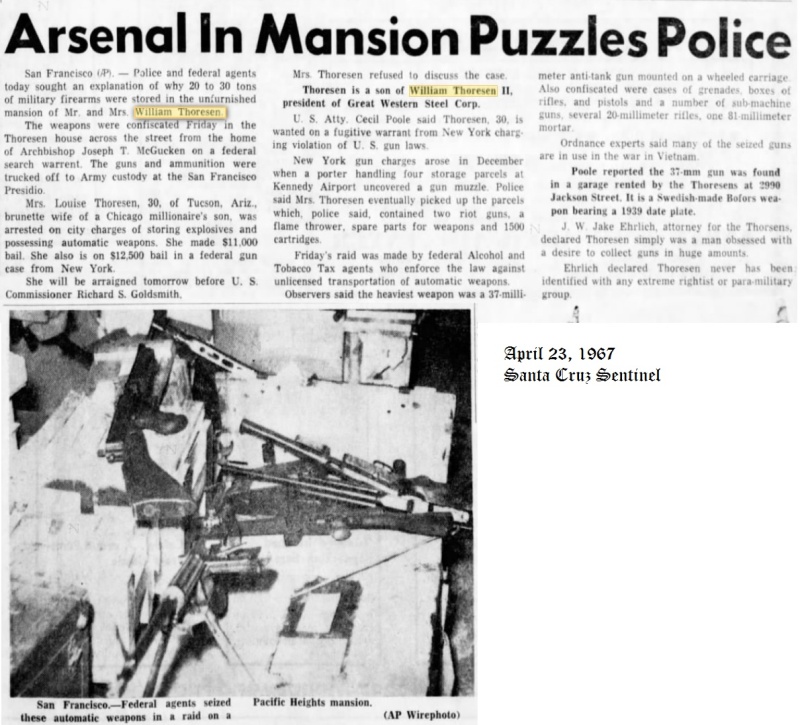