All known addresses on Ross

All known addresses on Ross

Just so we can get a decent timeline built at some point and establish where Ross was and when.

I believe the family moved from NY to Glendale, CA in late '57 or maybe early '58.

Ross also spent time in mental institutions such as Agnews Insane Asylum. If anyone knows which facilities he had spent time in, and when, please post that info.

There were at least three churches within a couple blocks of the Santa Cruz address in 1977. I wonder if Ross attended one of them. Live Oak United Methodist was the closest at 2091 17th Ave. I don't recall what Ross' religion was as a youngster.

Someone once told me of a neighbor of Ross' in Santa Cruz that they had heard Ross used to cause trouble with, but they could not recall the name of the neighbor so it might not even be true. I have tried finding some names of people in that area with police records and only found one so far. A guy named Robert Lee Peacock who lived at 2410 17th Ave. I believe that Peacock was born in 1945, making him a little younger than Ross. Peacock was sentenced to 9 months in jail in Dec. 1977 (just a few months after Ross' death) after his 3rd DUI offense.

I haven't done much research on Peacock yet, but I will post anything of interest if I do find anything.

There was also a William Tilden Pearce Jr. arrested for DUI on Sept. 30 1977 (the day after Ross' death). He lived 8-9 blocks from Ross. I know I'm really reaching here, but what the hell.

Went to zodiackillersite.com a bit ago, and earlier today there was a post from Seagull. She found Ross in the 1968 Santa Cruz Polk's directory. His address was listed as 512 2nd St Apt. 2 and his occupation was listed as a food server at UCSC (University of California Santa Cruz).

This is a great find by Seagull. I wonder how big the apartment was and if Ross had any roommates.

This address is just right around the corner from where Ross was arrested in Feb. 1968 for indecent exposure and disorderly conduct.

EDIT: Looks like a house or duplex. This link has a lot of photos... https://www.redfin.com/CA/Santa-Cruz/512-2nd-St-95060/home/2157508
Ross was probably just renting a room, but he probably had at least one roommate based on the setup of the place.


Found an article from Jan. 28, 1969 saying that two men were arrested for possession of stolen property and auto burglary. They are both listed at 512 2nd St in Santa Cruz.

A couple of names to check into. If either are still alive, they most likely knew Ross in 1968/1969.


Can't find anything on Douglas Peters yet.


Morf posted this earlier on his site. A guy at the same address from the May 20, 1970 Santa Cruz Sentinel. 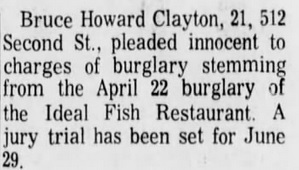 Clayton is alive and lives in Royal Oaks, CA.

Bruce Howard Clayton, Charles Edward Henning and Doug Peters all lived at 512 2nd St, but there are no apt. numbers listed for any of them. BUT, Seagull found 3 people living in apt. 2 with Ross in 1968. Hopefully at least one is still alive and can provide some info on Ross.

The 3 people are Cindy Kennedy and Phillip Kennedy, both listed as students (probably at UC Santa Cruz) and Terry Kennedy who worked in the kitchen at UC Santa Cruz with Ross. If Ross didn't have a vehicle (as it is believed) then he probably took a bus or rode to work with Terry.

I am trying to find info on the three Kennedy's right now. I found an email address for a Cindy Kennedy, but not sure if it's the right person or not. I sent an email so we will have to wait and see what happens.

This is great news. From my observing for last several months I have to say Ross is the best looking suspect of them all. He is a dead ringer to that sketch from the Stine killing and he had the problems of mentally challened to go with it all. The new info found for Ross over last few days i think is going to lead to alot more new info and maybe some clues. 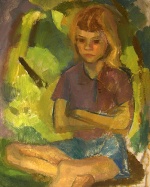 I comprised a lengthy list of people for you to search for. Unfortunatly I am not good at such things but I can usually find some names and address but not date of birth or death or reletives info etc.

Hope this will help.

Thanks for posting those! I was going to start looking for information on these three people, but work has been slammed tonight and I haven't really had much of a chance to do anything.


EDIT: The first thing that pops up when you google "Phillip Kennedy Santa Cruz, CA" is this facebook page that he liked... https://www.facebook.com/pages/Santa-Cruz-Beach-House/426874937341768
Can someone on facebook see if you can find his page and check it out?

The apartment at 512 2nd St. was very close to the beach, so this could very well be him or maybe a son with the same name?

I think I found Terry on facebook!!! Lives in Santa Cruz, born in 1949 (seems like an appropriate age). Went to high school in Springfield, IL. so might not be the right guy. I Sent his info to Morf. Lets hope Terry (if this is the right guy) will provide some info on Ross. Terry is married to Karen Kennedy. I think her last name is Oswald, but I'm not sure. When i google "Karen Oswald Kennedy" nothing but JFK assassination stuff comes up.

The real important question is what happened to Ross in 1968. We see an address and a job in 1967 and then in 1968 he is arrested and sent to a mental facility for evaluation and is longer living at the address from 1967. Can we find a way to find out if he still held his same job in 1968 and maybe even beyond that?

Also another thing. Some people say 'well you cant place Ross in the bay area in 1969.' I think that there being no record of his whereabouts in 1969 is in his advantage. He probably did spend some time in the mental facility in 1968 after his arrest but for how long? Can we find a record of any and all mental facilities the Dunbar caller was in? If he and Ross were in a same facility at the same time together that could be important. Suppose Ross was let free in late 1968 and he feels the urge to kill from being kept from society for a period of time and he goes to the Vallejo area thinking it is safer. Less populated area with better isolated spots. It goes well so he returns in July 1969 and does the same thing. And then he gets really gutsy or stops caring and kills Paul Stine in a wealthy residential area of San Francisco.

The only problem with this is that I do not think all of these murders were at random. I think Darlene Ferrin knew her killer. That gives this ross theory a spin in the negative direction.