Lizzie Andrew Borden (July 19, 1860 – June 1, 1927) was an American woman who was tried and acquitted for the 1892 axe murders of her father and her stepmother in Fall River, Massachusetts. The case was a cause célèbre throughout the United States. Following her release from the prison in which she had been held during the trial, Borden chose to remain a resident of Fall River, Massachusetts, for the rest of her life, despite facing significant ostracism. The Commonwealth of Massachusetts elected to charge no one else with the murder of Andrew and Abby Borden; speculation about the crimes still continues more than 100 years later.

Lizzie Borden's father, Andrew Jackson Borden, grew up in very modest surroundings and struggled financially as a young man, despite being the descendant of wealthy, influential area residents. He eventually prospered through the manufacture and sales of furniture and caskets, and went on to become a successful property developer. He directed several textile mills including the Globe Yarn Mill Company, Troy Cotton, and Woolen Manufacturing Company. He also owned considerable commercial property and was both president of the Union Savings Bank and a director of the Durfee Safe Deposit and Trust Co. At the time of his death, his estate was valued at $300,000 ($7,874,444 as of 2015).

Despite his wealth, Andrew was known for his frugality. For instance, the Borden home lacked indoor plumbing on its ground and first floor and was located near Andrew's businesses. The residence at 92 (230 after 1896) Second Street was located in an affluent area, but the wealthiest residents of Fall River, Massachusetts (which included Andrew Borden's cousins) generally lived in a more fashionable neighborhood ("The Hill") that was farther away from the industrial areas of the city and much more homogenous racially, ethnically, and socioeconomically.

Lizzie and her older sister, Emma Lenora Borden (1851–1927), had a relatively religious upbringing and attended Central Congregational Church. As a young woman, Lizzie was very involved in activities related to her church, including teaching Sunday school to children of recent immigrants to America. She also was involved in Christian organizations such as the Christian Endeavor Society, for which she served as secretary-treasurer, and contemporary social movements such as the Women’s Christian Temperance Union (WCTU). She was also a member of the Ladies' Fruit and Flower Mission.

During the inquest, the Bordens' live-in maid Bridget Sullivan testified that Lizzie and Emma rarely ate meals with their parents. Lizzie stated, during further police questioning and during the inquest, that she called her stepmother "Mrs. Borden" and demurred on whether they had a cordial relationship. In May 1892 Andrew, believing that pigeons in the barn were attracting local children to hunt them, killed the pigeons with a hatchet. Lizzie had recently built a roost for the pigeons and was upset at their deaths. A family argument in July 1892 prompted both sisters to take extended "vacations" in New Bedford. Returning to Fall River the week before the murders, Lizzie chose to stay in a Fall River rooming house for four days before returning to the family residence.

Tension had been growing in the family in the months before the murders, especially over Andrew's gifts of real estate to various branches of Abby's family. After their stepmother's sister received a house, the sisters demanded and received a rental property (the home they had lived in until their mother died) which they purchased from their father for $1; they then sold the property back to their father for $5,000 ($131,241 as at 2015). The night before the murders, John Vinnicum Morse, the brother of Lizzie and Emma's deceased mother, Sarah Anthony (Morse) Borden (1823–1863), visited and was invited to stay for a few days to discuss business matters with Andrew. Some writers have speculated that their conversation, particularly about property transfer, may have aggravated an already tense situation.

For several days before the murders, the entire household had been violently ill. A family friend later speculated that mutton left on the stove for use in meals over several days was the cause, but Abby had feared poisoning, as Andrew Borden had not been a popular man. It should be noted that the Bordens did have an icebox, and some historians feel that the hot weather at the time makes it unlikely it was not used.

Abby Durfee Gray Borden
Although cleaning the guest room was one of Lizzie and Emma's regular chores, John Morse had slept in the room the previous night, and Abby had gone up to the room to make the bed. According to the forensic investigation, Abby was facing her killer at the time of the attack. She was struck on the side of the head with a hatchet which cut her just above the ear, causing her to turn and fall facedown on the floor, which created contusions on her nose and forehead. Her killer is then assumed to have sat on her back and delivered 19 direct hits to the back of her head.

Andrew Jackson Borden
After breakfast, Andrew and Morse went to the sitting room where they chatted for an hour. Morse left to visit a relative at 8:45 a.m. and Andrew left for his morning walk sometime after 9 a.m. When he returned at around 10:30 a.m., his key failed to open the door, so he knocked for attention. Bridget went to unlock the door; finding it jammed, she uttered an expletive. She would later testify that she heard Lizzie laughing immediately after this; she did not see Lizzie, but she stated that the laughter was coming from the top of the stairs. This was later considered significant because Abby's body was visible through the gap between bed and floor when climbing the stairs, only becoming hidden by the bed upon reaching the top. Lizzie later denied being upstairs and testified that her father had asked her where Abby was, and she had replied that a messenger had delivered a summons to visit a sick friend. Lizzie then removed Andrew's boots and helped him into his slippers before he lay down on the sofa for a nap. Next she informed Bridget of a department-store sale and permitted her to go, but Bridget felt unwell and went to take a nap in her bedroom instead.

Lizzie gave two different accounts of what happened next: originally she stated that she went to the barn to look for iron or tin to fix a door and remained in the loft for 20 to 30 minutes eating pears. Police were skeptical, finding it unlikely that anyone could stand the stifling heat of the loft for that long; they also reported finding no footprints in the dust.

Bridget Sullivan testified that she was in her third-floor room, resting from cleaning windows, when just before 11:10 a.m. she heard Lizzie call from downstairs, "Maggie, come quick! Father's dead. Somebody came in and killed him." (Lizzie always called Bridget Sullivan "Maggie", the name of an earlier maid.)Andrew was slumped on a couch in the downstairs sitting room, struck 10 or 11 times with a hatchet-like weapon. One of his eyeballs had been split cleanly in two, suggesting that he had been asleep when attacked. His still-bleeding wounds suggested a quite recent attack.

Lizzie's answers to the police officers' questions were at times strange and contradictory. Initially she reported hearing a groan, or a scraping noise, or a distress call, before entering the house, but two hours later she said she had heard nothing and entered the house not realizing that anything was wrong. When asked where her stepmother was, she recounted Abby receiving a note asking her to visit a sick friend. She also stated that she thought Abby had returned and asked if someone could go upstairs and look for her. Bridget and a neighbor, Mrs. Churchill, were halfway up the stairs, their eyes level with the floor, when they looked into the guest room and saw Abby lying facedown on the floor. Most of the officers who interviewed Lizzie reported that they disliked her attitude; some said she was too calm and poised. Despite Lizzie's "attitude" and changing alibis, nobody bothered to check her for bloodstains. Police did search her room, but it was merely a cursory inspection; at the trial they admitted to not doing a proper search because Lizzie was not feeling well. They were subsequently criticized for their lack of diligence.

In the basement, police found two hatchets, two axes, and a hatchet-head with a broken handle. The hatchet-head was suspected of being the murder weapon as the handle looked like a fresh break and the ash and dust on the head, unlike that on the other bladed tools, appeared to have been deliberately applied to make it look as if it had been in the basement for some time. However, none of these tools were removed from the house.

The sisters' friend, Alice Russell, decided to stay with them while John Morse spent the night in the attic guest room, contrary to later accounts that he slept in the murder-site guest room. Police were stationed around the house, and later that night an officer saw Lizzie enter the basement and bend over the pails containing her parents' bloody clothing, an action never explained. The following night, Morse left the house and was swarmed by hundreds of people; police had to escort him back to the house. On August 6, police conducted a more thorough search of the house, inspecting the sisters' clothing and confiscating the broken-handled hatchet-head. That evening a police officer and the mayor visited the Bordens, and Lizzie was informed that she was a suspect in the murders. The next morning, Alice Russell entered the kitchen to find Lizzie Borden burning a dress on the fire. Lizzie explained that she was burning it because it was covered in paint. This may have been an innocent reaction to the anxiety of being suspected; it was never determined whether it was the actual dress she had been wearing on the day of the murders.

Lizzie appeared at the inquest hearing on August 8. Her request to have her family attorney present was refused under a state statute providing that an inquest may have been held in private. She had been prescribed regular doses of morphine to calm her nerves, and it is possible that her testimony was affected by this. Lizzie's behavior was erratic, and she often refused to answer a question even if the answer would be beneficial to her. She often contradicted herself, such as claiming to have been in the kitchen reading a magazine when her father arrived home, then claiming to have been in the dining room doing some ironing, and then claiming to have been coming down the stairs. She had also claimed to have removed her father's boots and put slippers on him despite police photographs clearly showing Andrew wearing his boots. The district attorney was very aggressive and confrontational. On August 11, Lizzie was served with a warrant of arrest and jailed. The inquest testimony, the basis for the modern debate regarding her guilt or innocence, was later ruled inadmissible at her trial in June 1893.

A grand jury began hearing evidence on November 7, and Lizzie was indicted on December 2.

On June 20, after deliberating an hour and a half, the jury acquitted Borden.

The trial has been compared to the later trials of Bruno Hauptmann, Ethel and Julius Rosenberg, and O.J. Simpson as a landmark in publicity and public interest in the history of American legal proceedings. 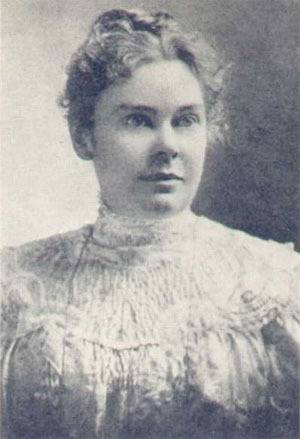