Probably should have a thread on this guy. He confessed to 5 murders, 2 were double murders and the other was his adopted son I believe. I think this guy commited far more than 5 murders, probably 30 or more.


Edward Wayne Edwards (June 14, 1933 – April 7, 2011) was a convicted American serial killer. Edwards escaped from jail in Akron, Ohio in 1955 by pushing past a guard and fled across the country, holding up gas stations for money. In 1961, he landed on the FBI's Ten Most Wanted Fugitives list. He eventually was captured and arrested in Atlanta, Georgia on January 20, 1962. Paroled in 1967, between 1977 and 1996 he murdered at least 5 people and is suspected in many other killings as well.

Edwards was born in Akron, Ohio; he grew up primarily as an orphan after witnessing the suicide of his mother. In his autobiography, Edwards claimed that he was abused, both physically and emotionally in an orphanage, which contributed to his criminal behavior. He was allowed to get out of juvenile detention to join the U.S. Marines, went AWOL, and was subsequently dishonorably discharged. Then he returned to his criminal lifestyle. He traveled frequently during his 20s and 30s doing odd jobs, such as working as a ship docker, vacuum retailer and handyman. He lived most of his life, when not incarcerated, in Louisville, Kentucky.

In 1955 Edwards escaped from a jail in Akron and drifted around the country, robbing gas stations when he needed money. He wrote that he never disguised his appearance during crimes because he wanted to be famous. His name was placed on the FBI's 10 Most Wanted list in 1961. He was eventually imprisoned in Leavenworth, from which he was paroled in 1967. He claimed that as the result of the influence of a benevolent guard at Leavenworth, he reformed and married, and became a motivational speaker on the subject of his reform.

Edwards appeared on two television shows, "To Tell the Truth" (1972) and "What's My Line?" He wrote an autobiography titled The Metamorphosis of a Criminal: The True Life Story of Ed Edwards in 1972; but by 1982 he had returned to crime, and was imprisoned in Pennsylvania for two years for arson.

The first murders for which Edwards was convicted, of Billy Lavaco and Judy Straub, a double murder, took place in Ohio in 1977. He received life sentences for these crimes in 2010.

The second pair of murders were of Tim Hack and Kelly Drew, another double homicide, in Wisconsin, in 1980. These were referred to as the "Sweetheart Murders". Edwards had been questioned at the time, but there was no basis to hold him. Almost 29 years later his connection to the crime was established by means of DNA testing. Apparently, Edwards's own child tipped off police about his possible involvement.

Lastly Edwards confessed to the 1996 murder of Danny Boy Edwards in Ohio. The victim was referred to as an adopted child who had lived with Edwards and his wife for several years. Danny's original name was Danny Law Gloeckner. Edwards murdered Danny Boy in a scheme to collect insurance money. He was sentenced to death for this crime in March 2011, but died in prison of natural causes a month later.

According to Phil Stanford in his book The Peyton-Allan Files, Edwards may have been responsible for the murders of Beverly Allan and Larry Peyton in Portland, Oregon in 1960. Two men were arrested and imprisoned for these murders, but released from prison early. Authorities maintain that the correct persons were prosecuted.

Some investigators have noted that Edwards lived in northern California during each of the Zodiac Killer's murders in the late 1960s and would have, at the time, closely matched the Zodiac's description, although others dispute that claim.

Ex-FBI cold-case expert John Cameron asserts that the 2005 murder of 25-year-old photographer Teresa Halbach has all the earmarks of Edwards.

1948: Sent to reform school in Pennsylvania.

April 1952: Sentenced to a federal reformatory in Chillicothe, Ohio, for two years for impersonating a Marine and interstate transportation of a stolen car.

April 1955: Broke out of Akron jail while being held on burglary charges.

1956: Caught in Montana after a series of armed robberies, sentenced to penitentiary in Deer Lodge.

July 1959: Released in Montana, taken to Portland to stand trial for two armed robberies in 1956, sentenced to five years of probation.

1960: Broke out of jail in Portland, where he'd been arrested for turning in a false fire alarm. Questioned in connection with a double murder of a young couple. Traced to Colorado, where he cashed some checks on a Portland Bowling Club of which he was a member.

Nov. 10, 1961: Added to FBI's 10 Most Wanted fugitives list. A federal warrant charged him with unlawful interstate flight to avoid confinement after a robbery conviction.

May 18 1962: Sentenced to 16 years in Leavenworth Federal Penitentiary.

1971-1973: Touring as a speaker on prison reform, published book on his rehabilitation

September 1980: Left Wisconsin after being questioned about the Hack/Drew murders.

I wonder if he ever had anything to do with Peek-a-boo Pennington, maybe worked for him, maybe hated him for some reason? This was from the early 50s, Edwards did time for impersonating a private investigator in Florida. 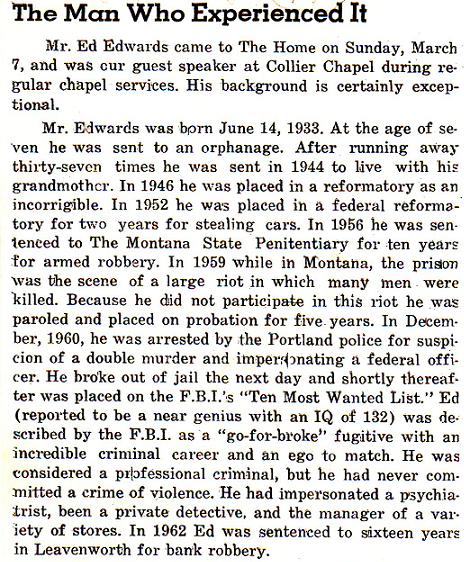 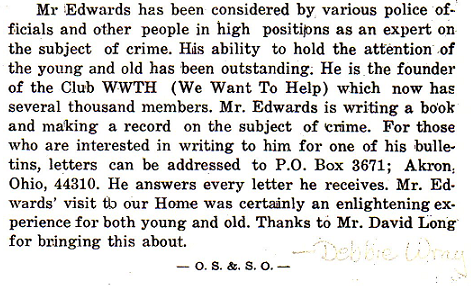 Notice it says he ran away 37 times. Pretty specific number and also the number of victims Zodiac claimed to have killed.

I don't know enough about Edwards to say that he makes for a good Z suspect, but I do think he killed a lot more people than what he confessed to. But the guy who did all the research on Edwards, the retired detective (I forget his name), he kind of turns me off to Edwards as a Z suspect because of the way he presents his information. He states his opinions as fact, and I really don't like when people do that.

This guy claims Edwards committed all these murders and kidnappings, but shows no proof. And he shows no proof that Edwards was even in any of these areas during the crimes. The whole JonBenet Ramsey thing seems really far fetched, but not as much as Edwards killing Elizabeth Short (the Black Dahlia) when he was just 13 years old.

I have to politely disagree about Kane. He was smart and was a slick SOB, even after his accident. He was pulling scams years after the accident and still had a sharp mind. I'm not saying he was Zodiac or that he came up with the ciphers, but I definitely don't rule him out because of the accident.

Also, you forgot to mention Ross Sullivan. He, of course, spent time in mental facilities.

I do like your idea about Weill calling the Dunbar show to "trap" Zodiac. I have spent a lot of time researching Weill and trying to figure out what his angle was and why he would call the Dunbar show, assuming it actually was him that placed that phone call. Your idea is something I hadn't considered before.

Actually I have looked for any connection between suspects because I think Manalli wrote the letters but someone else did the killing. To tell you the truth, I never really liked Edwards as a Zodiac suspect for a few reasons, one being that nobody knows if he was in the bay area at the time. But one thing I did not know that you mentioned was that he had an aunt who worked near where Stine picked up his killer and that the same aunt lived near Washington & Cherry. That interests me! Would you be able to provide her name? I have did a lot of research on people who lived in that area, and would like to research this woman and see if there are any interesting connections to any of the other neighborhood people I have checked into.

For the record, nobody is certain that Zodiac said Deer Lodge or even Montana. It has been stated that he actually said that he escaped from a prison in Colorado but the police changed Hartnell's statement to say Montana for some reason. I still look for connections to Montana and specifically Deer Lodge because nobody is really sure what Hartnell said. I wish he would go on record and clear that up, if he even remembers.

Last edited by mickeydchicken on February 7th 2018, 9:14 am; edited 2 times in total (Reason for editing : spelling)

Last edited by mickeydchicken on February 7th 2018, 9:15 am; edited 4 times in total (Reason for editing : clarification)

mickeydchicken wrote:It also occurs in this letter -- as a coincidence.  The final coincidence is that both letters have the word zodiac encrypted as anagram patterns in them.

The JBR note has a very simple acrostic -- going down with simple letter masking.  Tim Miller is more complex.  It's a circular acrostic.

But I found both. 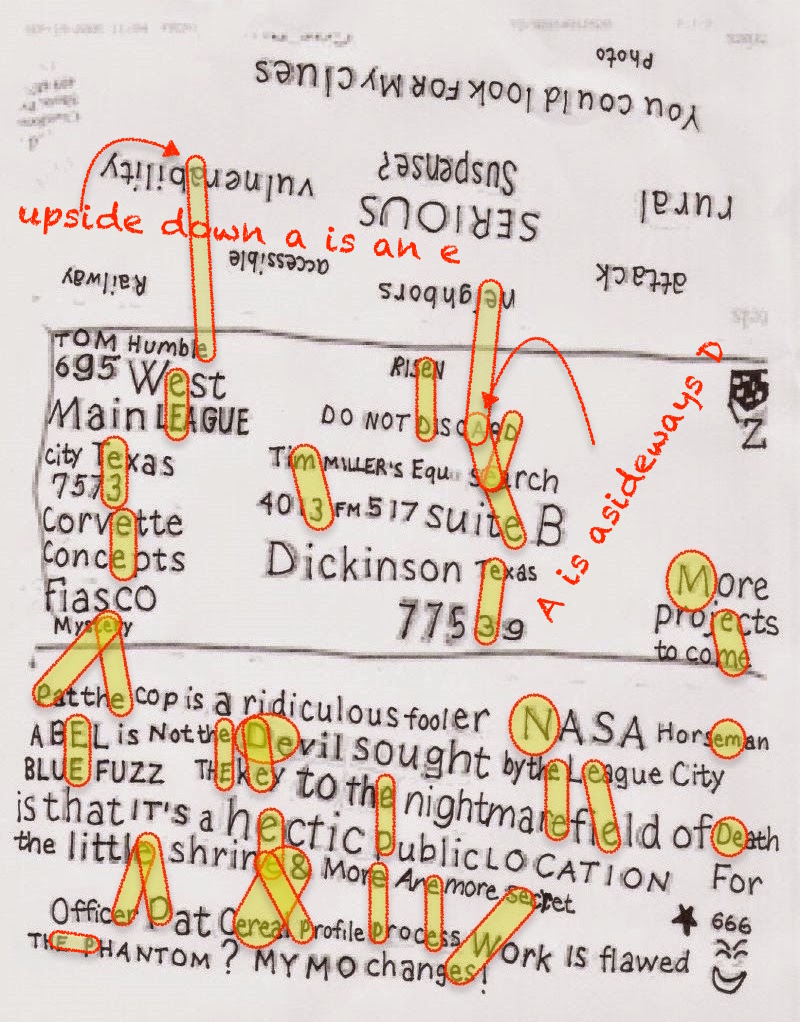 I understand your posts below this, but this one confuses my dumb ass! The 'A' as a sideways 'd' for example... I don't get that at all. Give me a math quiz with numbers and I will figure it out with ease, but things like this just go right over my head.

Can anyone else weigh in and give an opinion on this?

Last edited by mickeydchicken on February 7th 2018, 9:20 am; edited 3 times in total (Reason for editing : spelling)