DePugh is not and should not be considered a Zodiac suspect, should he? Even if not, he should have his own thread on here, so here it is. 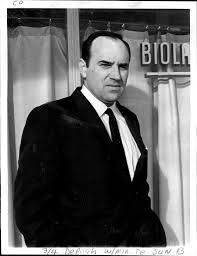 DePugh was born in Independence, Missouri, where his father served as deputy sheriff. He enlisted in the United States Army during World War II, but he was dismissed for nervousness and depression. He attended Kansas State University for a few months before dropping out. DePugh went on to found a veterinary drug firm in 1953 that folded in 1956. He enrolled at Washburn University briefly, then started BioLab, another veterinary drug firm, in Norborne, Missouri, which was more successful. In addition to veterinary products, the company produces a malt-flavored ultra-compact storage food for humans called Minuteman Survival Tabs. Some 45 years later, this product is still popular in survivalist circles. He became a member of the John Birch Society and according to a biography he was influenced by the House Un-American Activities Committee.

DePugh published a 10-page pamphlet on guerilla warfare via the Minutemen in 1961. The Minutemen's newsletter was called On Target. He was a founder of the Patriotic Party in 1966.

In 1966, DePugh was arrested on federal weapons charges, which were later dismissed. Their offices were bombed in 1967, and DePugh resigned from the Minutemen in 1967. In February 1968, he was indicted by a federal grand jury in Seattle, Washington for conspiracy to commit bank robbery. Also in 1968, he was arrested for violation of federal firearms laws. He skipped bail and went underground for over a year until he was caught in 1969 in Truth or Consequences, New Mexico. He was convicted in 1970 and released from prison in May 1973. DePugh later wrote an anti-communist quasi-survivalist manual, Can You Survive?, and was associated briefly with Liberty Lobby.

In the 1980s DePugh became involved in the Identity Christianity movement. In the early 1990s he was tried but acquitted on a morals and pornography charge with an underage girl and on three counts of federal firearms violations. DePugh eventually grew disgusted with all politics and retired from activism.

http://mauryk2.com/2009/08/29/robert-bolivar-depugh-r-i-p-founder-of-the-minutemen/
Bob DePugh, founder of The Minutemen, died June 30, 2009, at his apartment, below a storefront church in Richmond, Missouri. He was 86 and alone. There was no funeral. The body was cremated and funds solicited to pay for it.

Out of politics for years, he was largely forgotten. But as journalist T.J. Greaney pointed out in an obit for the Columbia Daily Tribune:

In the 1960s if you entered a restroom or a phone booth, there’s a chance you might have noticed a three-inch-square sticker at eye level. A closer look might show the image of a rifle crosshairs superimposed over a menacing text:

“See that old man at the corner where you buy your papers?” the sticker read. “He may have a silencer equipped pistol under his coat. That fountain pen in the pocket of the insurance salesman that calls on you might be a cyanide gas gun. What about your milkman? Arsenic works slow but sure . . . Traitors, beware! Even now the crosshairs are on the back of your necks.”

Pretty heady stuff. But what was the truth?

The Minutemen had been founded in 1961 while DePugh and some friends were out duck hunting. Heavily influenced by the John Birch Society, they feared an impending Communist takeover of the United States and decided to organize a violent counteraction.

Bob DePugh published a 10-page pamphlet on guerilla warfare and put out a monthly newsletter called ON TARGET. Organized into secret cells of 5 to 15 members, they trained and stockpiled weapons.

The problem was they loudly proclaimed their goals, exaggerated their strength–claiming 10,000 while having under 500–and made themselves the target of law enforcement. While probably soundly organized in their Missouri base, they weren’t too choosy who they allowed to affiliate in the rest of the country. The result was DePugh, who had been named after the revolutionary South America and imagined himself to be the Paul Revere of the 20th century, presided over a group of a few hundred described by one observer as “the damnedest bunch of dingalings, blabber mouths and outright fuck-ups to ever come down the pike.”

If you’re going to organize an underground guerrilla army, The Minutemen provided a negative example. Fifteen is too large for a cell; five should be the max. You don’t have a loose federation of recruits nationally that you don’t even know. You have to have a low profile like drug smugglers–those who survive & thrive don’t act like characters out of the movie “Scarface.”

By contrast, Minutemen paramiltary training sessions were well-publicized. Men would crawl on their bellies, practice markmanship and booby-trapping. And again, DePugh carelessly allowed loosely-affiliated groups to spring up across the country under The Minutemen banner. He’d have no control but would be liable for any blame.

DePugh had a knack for publicity and newspapers picked up his claims of having a vast underground of thousands. In truth, the underground didn’t amount to much but the Feds picked up the scent and were after him. In 1967, he was convicted of violating the National Firearms Act for having secret caches of illegal weapons which were found.

He jumped bail and was on the lam for two years. Caught, he served four years in prison and The Minutemen were no more. He never re-gained the influence he once had. And he still had legal problems because of screw-ups under his banner over whom he had no control. For example, a group in Connecticutt that tried firing mortars into a pacifist camp.

What should he have done? His themes of self-reliance, ultra-patriotism and anti-communism struck a chord. He authored several popular books on survivalism which are still in print and usedful. He founded the Patriotic Party in 1966. He should have concentrated on the party and above-ground stuff and done the rest on the QT, quietly and patiently. But in 1967 the crap hit the fan and it all crashed.

His analysis was premature by about 30 years. (Think Tom Chittum and his book on Civil War Two.) There was no imminent Communist take-over. Anti-communism is usually strongest when the the actual communists are weakest.

But we can learn from Bob DePugh’s successes and his failures. He at least tried. 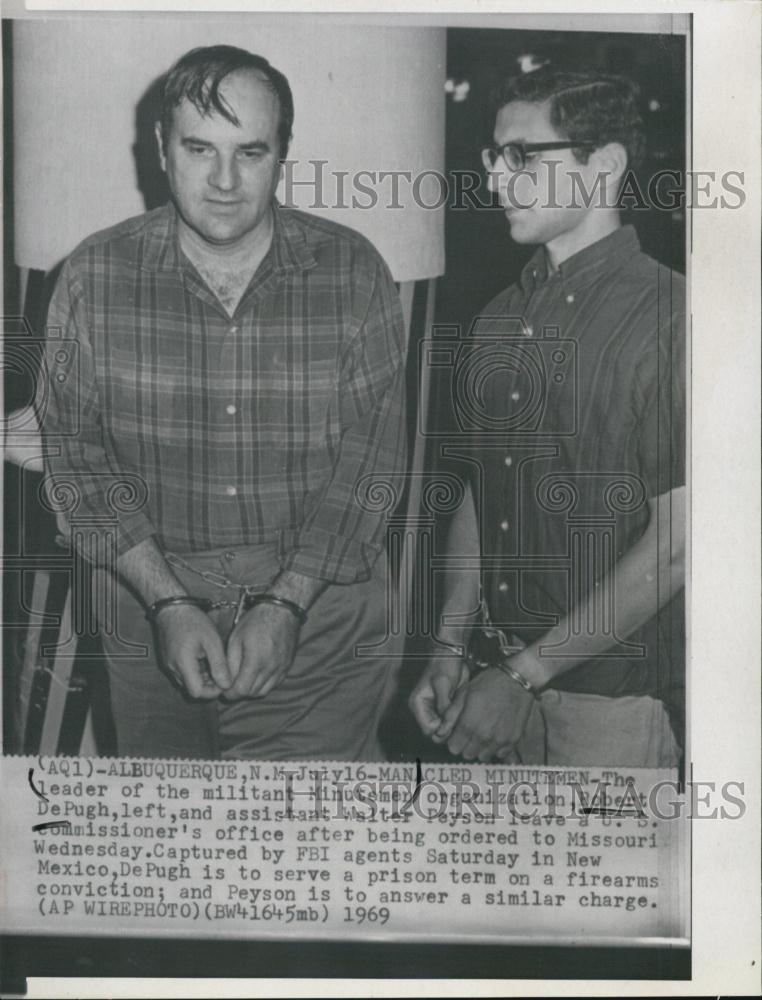 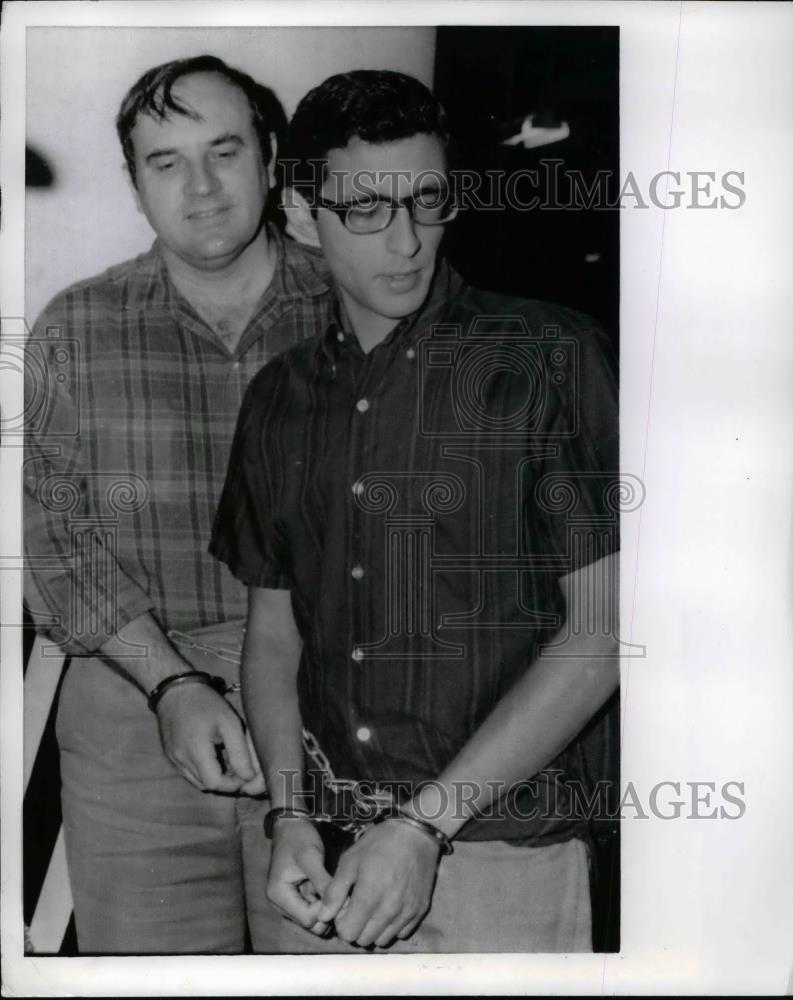 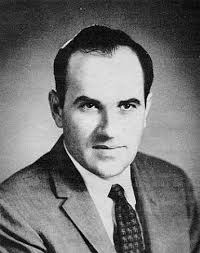 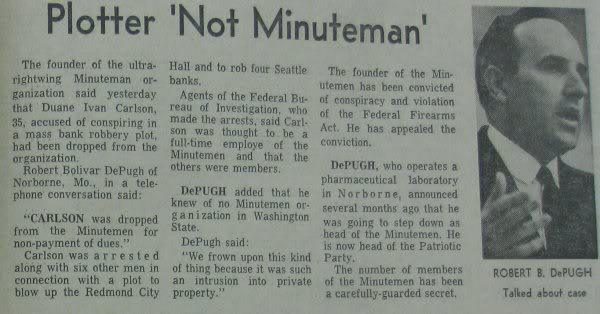 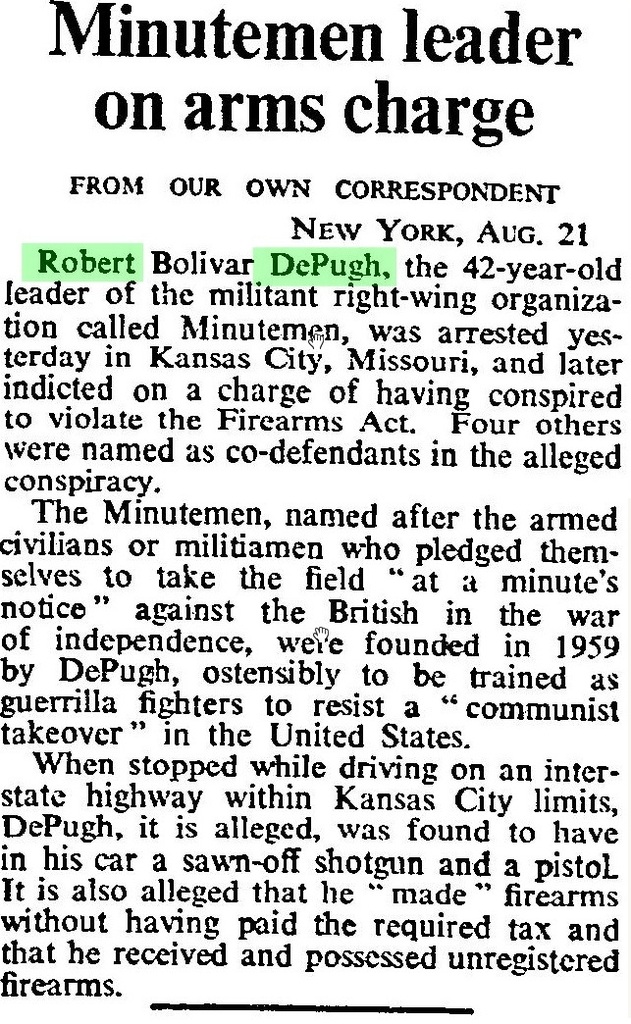 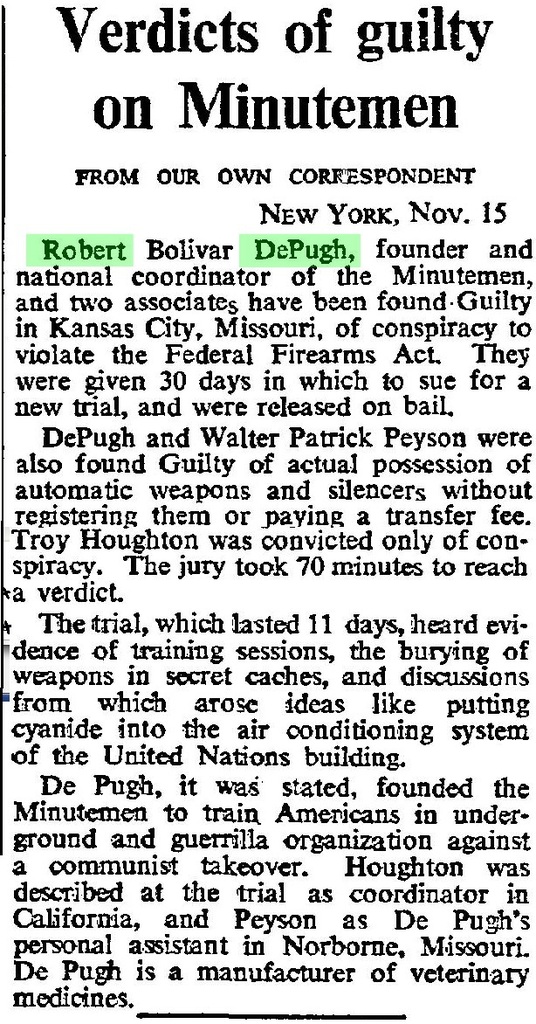 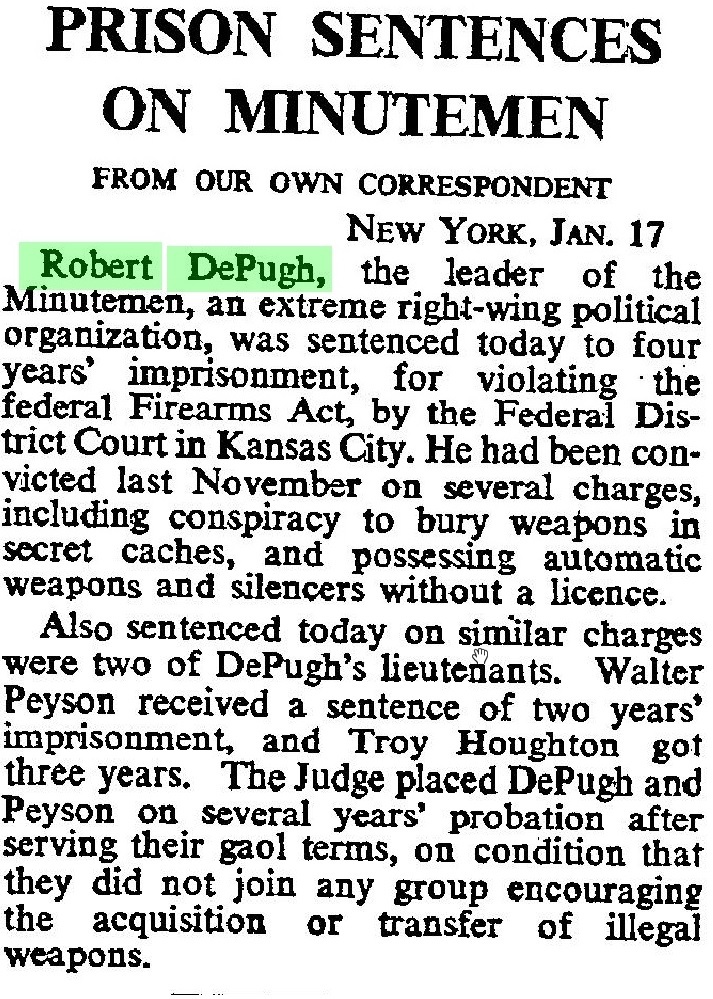 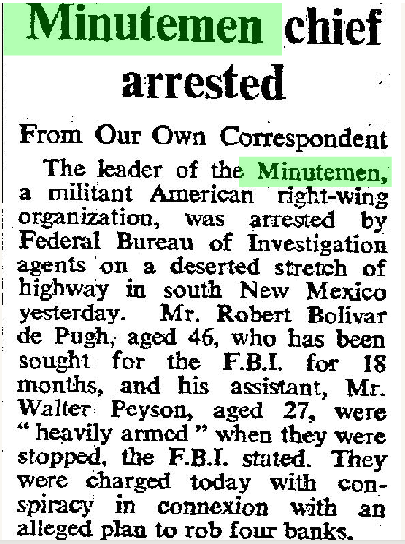 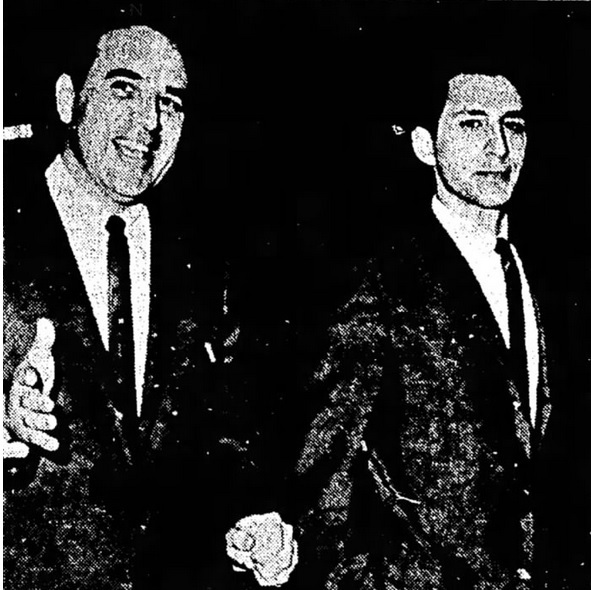 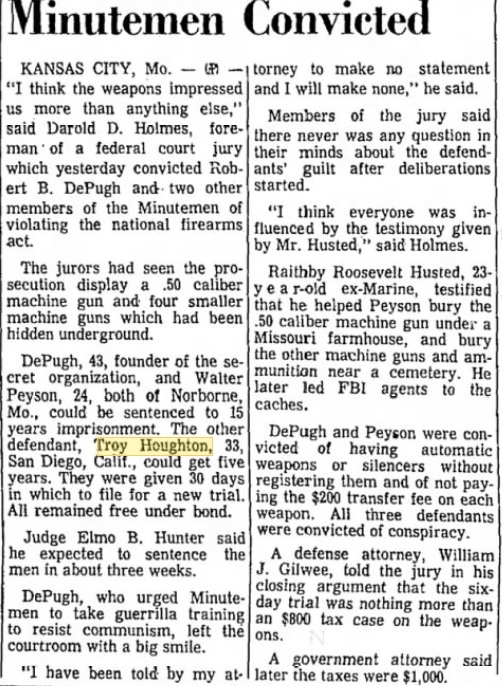 DePugh looks a little bit like Kevin Spacey. If anyone were to make a Minutemen movie, Spacey would be a great DePugh... now who is going to make the movie???

DePugh and Peyson FBI wanted posters. I'm guessing these are from 1968. 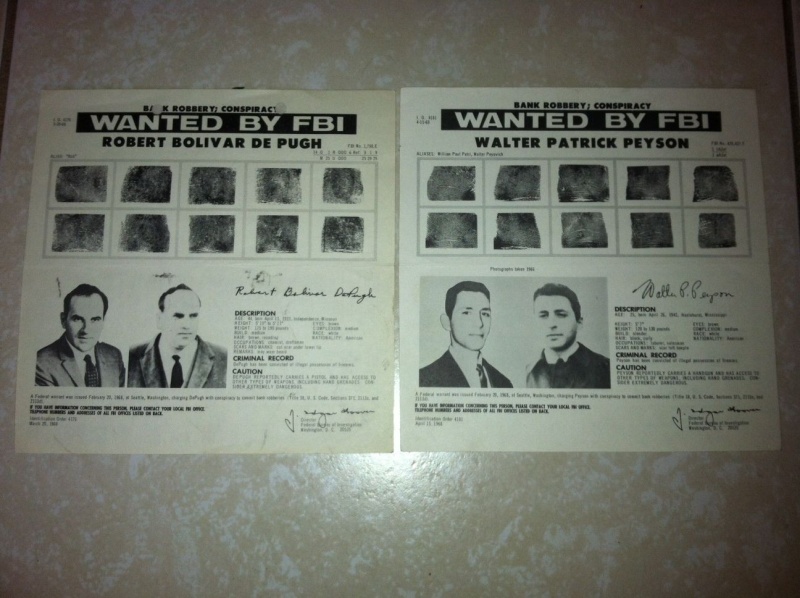 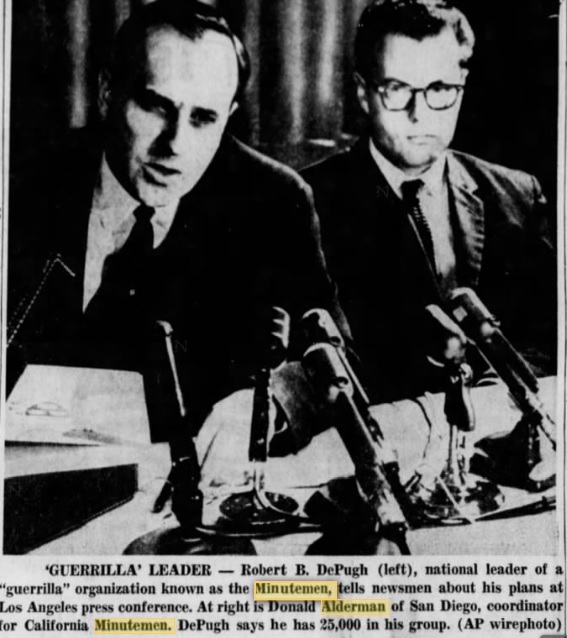