The Krays! Legend of the Twins.

The Krays! Legend of the Twins.

The Kray Brothers have always been of fascination for Me but not for the reason most others find Ronnie & Reggie fascinating. For Myself, the draw to them comes from the fact that My Father was one half of identical twin Brothers.

I read about the twins, Ronnie and Reggie, sometimes and laugh because it is so familiar down to the personality differences between the Krays.

Ron Kray, the volatile and impulsive reacting Half who 'Act Now, think later' type against the more calm, thinking brother who curve not only his own desire to act, but is the voice of reason for The other.

The Krays first serious arrest and charge Came in the form of Assault on Police after A Local Bobby, who held distain for the Twins and utter contempt that they had recently been found 'Not Guilty' by a Jury, came up behind the Twins and punched Reg from behind. Before Reggie could process what just happened He said:

"Course, My Brother Ron being the way He was, Ron immediately hit the copper with a right hand of His own which made the officer go over, and then He got kicked in the face three or four times and me and Ron left him on the floor in the street."

I remember my dad telling me that as a drunken youth, He was arrested and put in the back of a cop car and as Police got in driver seat, The old man booted him in back of the head. Also under arrest, my dad's twin. Next morning My old man's twin got bail with my dad and had black eye and fat lip. He told my dad:

"3am the cell door fly's open, in rush three cops and start punching me and shouting " You wont kick one of ours in the head again you basrard!"

My dad laughed and knew they had retaliated against the wrong twin!

The Kray Twins ruled East London,  South London was the turf of another pair o siblings in the form of the Richardson Brothers, Charlie and Eddie.  Far less famous than their East end counterparts,. But twice as feared!

Never heard of these guys but you have drawn my interest... time to hit the Youtubes!!!

Ronnie Kray, in a discussion with Mad Frank Fraser, was declaring He was fed up of prison and Mad Frank advised Ron to get certified insane and then get transferred from prison to Broadmoor Hospital for the criminally insane. Fraser explains to Ronnie that your not banged up in a cell nor techinaclyally in prison as Broodmoor is a hospital and as such, your considered a patient rather than prisoner. Ronnie immediately replied that He has been diagnosed mentally ill but this week coming He will go more nuts and act psychopathic like never before.

Within Six weeks He was certified insane and transferred to Broadmoor.

Google "Peter Sutcliffe attacked" and view pics of the state of his face courtesy of
Ronnie. Ron was moved to a separate wing in B'moor with staff telling Ron they have Intel that Ron is imminently about to attack Sutcliffe. Ron simply gave a fellow patient the order to do it, and I assumed it was because Ron took exception to The Ripper attacking and killing women.

I was wrong. Apparently Ron told a visitor on a visit once "See that prick there (points at Sutcliffe)? Thinks He's something that guy, walks around here like he owns the place. You know who that is don't you?" Asked Ron, "The Ripper, Peter Sutcliffe....

Moments later Sutcliffe bypassed Ron and barged the back of Ronnie's chair. Ronnie leapt up & ordered "Fat Prick" to immediately apologise and had to be held back from attacking Sutcliffe. Sutcliffe was said to not even look over his shoulder to acknowledge Ronnie's demands which infuriated Him and led to Sutcliffe being disfigured as he was cornered and slashed violently, screaming for help by all accounts as a fellow patient and friend of 'The Colnel' Ronnie Kray set about attacked Sutcliffe a week or so later.

Was laughing at Rons "F you" attitude last week. The defence council for the Twins advised them not to take the stand to give evidence in their defence as He knew on cross examination the Crown would have no issue in provoking Ron into a rage and Reg, being the more intelligent and calmer of the two, agreed.

Ronnie immediately ignored his councils advice to announce to the judge he would be taking the stand!

On cross, the Crown put I to Ronnie: "Isn't it a fact Mr Kray that yourself and twin brother Reg are cold, callous criminals who use violence, intimidation and threats to extort moneys from your numerous protection rackets?"


Sutcliffe got all fucked up!

Another incident of amusement was when Ron and 5 or 6 of the firm were sat at a table eating and Reggie came in And began circling the table picking a piece of food from each mans plate.

Rons now observing his twin like a lion waiting for its prey to make a mistake and venture too close. Reg got to Rons place and reached out and grasped a slice of cucumber on Rons plate. Ron responded by ramming his fork into the back of his brothers hand.

One hour later Reg called Ron out and loaded the short tempered sibling. Ron got up and charged at reg and was met with a right hook knocking Ronnie to the floor and his glasses smashed off his face.

Reggie was regarded by almost all to be the harder man & better fighter.

Someone needs to make a movie about these guys... if it hasn't been done already. I'm reading up now and finding it very entertaining.


Sutcliffe got all fucked up!

Well He failed to apologize and that photo is the result. Lol.

In Ronnie's first time in the. Nut house under section via the mental health act, he received a visit from twin brother Reggie. The two swapped clothes and Reg walked back to 'His' cell while Ron walked out the front door. Three hours later Reggie informed them they had the wrong twin.

There is a movie out there, aptly called 'The Krays'

Update: In 2015 the Movie 'Legend' was released that portrayed the life and crimes of the Kray Twins.

WelshChappie wrote:There is a movie out there, aptly called 'The Krays'

Oh, ok... thanks... I'm gonna check the Amazon Firestick tomorrow and see if it is on there so I can watch it.

"Someone needs to make a movie about these guys... if it hasn't been done already. I'm reading up now and finding it..."

Scene from 'Legend: The Story of the Krays'

"You going Ron or Reg?" lol

Top movie, highly recommended. Tom Hardy played both twins, Ronnie & Reggie in the movie. Even the pic that Hardy did to market this release was uncanny....

First image, Tom Hardy and his reenactment of the actual twins photo seen below it.... 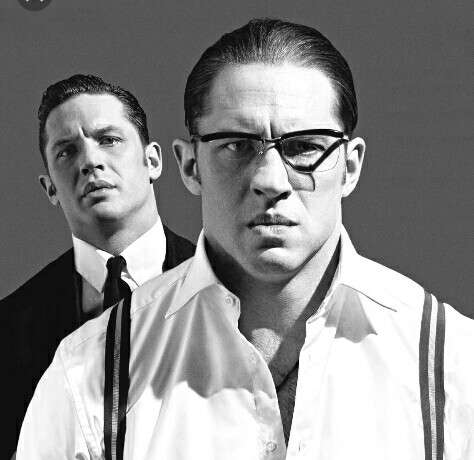 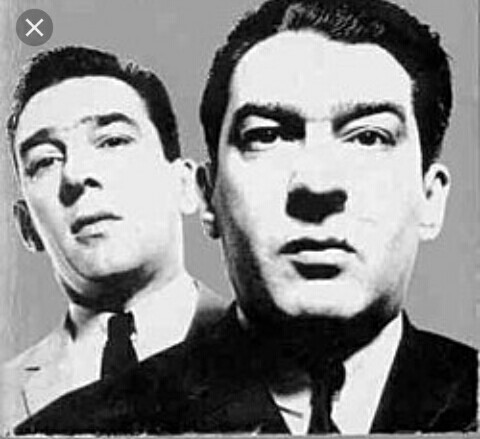