This attack is very similar to that of Domingos/Edwards, and was somewhat in the same area. 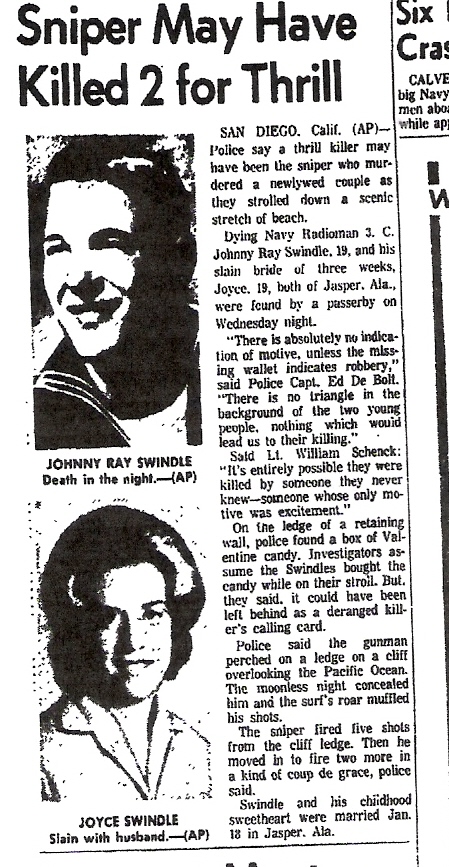 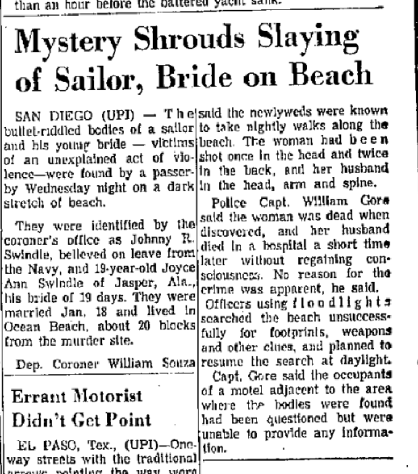 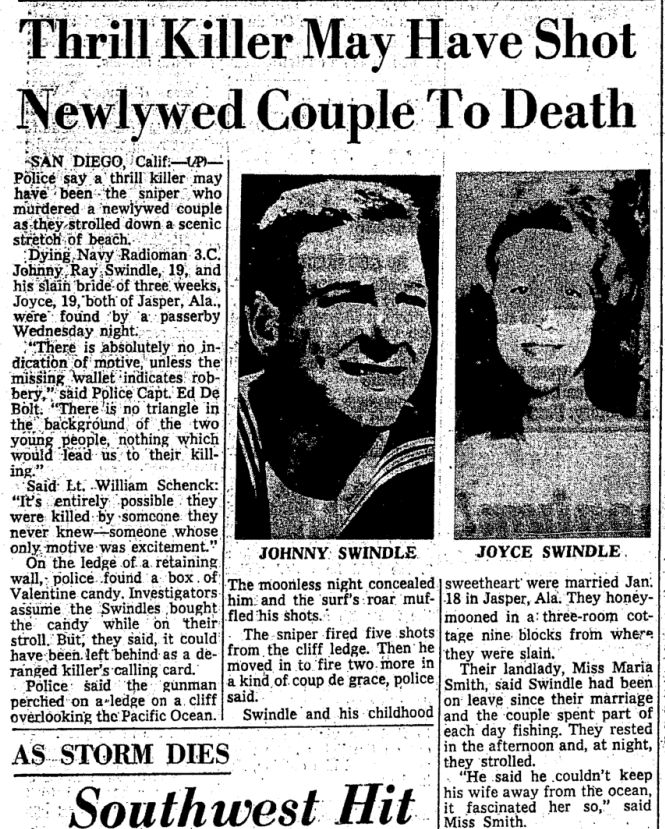 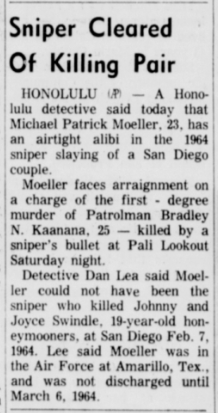 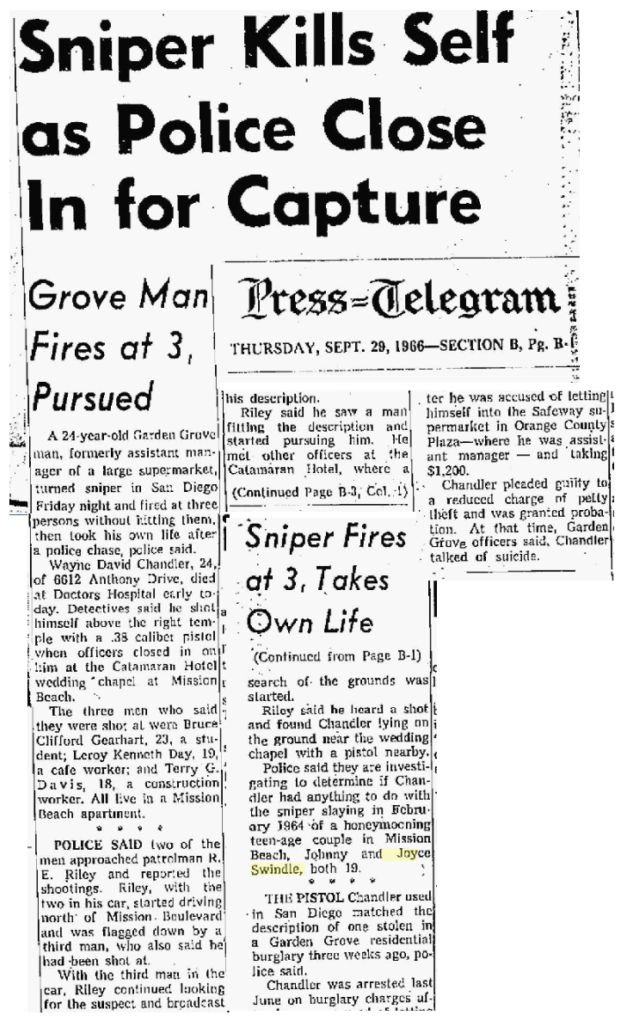 "For many years now, I've been of the opinion that the man who would later go on to become the Zodiac murdered not only Robert Domingos, Linda Edwards, and Cheri Jo Bates, but also Johnny Ray and Joyce Ann Swindle.

The Swindles were from Jasper, Alabama. At seventeen years old, Johnny Ray joined the Navy. By the time 1963 was turning to 1964, the sailor's initial enlistment was coming to an end. Johnny Ray decided to re-up. With his re-enlistment bonus in hand, he took his accumulated vacation, went back to Jasper, married his high-school sweetheart, Joyce, and brought her back to San Diego.

Joyce was fascinated by the Pacific Ocean and hence the couple made it a point to go for a walk along the beach every night. By February 5th, less than three weeks after the small wedding in Jasper, Alabama, the newlywed's honeymoon was coming to an end. Johnny Ray had orders to report for duty on the seventh. In particular, the couple would be apart for their first Valentine's day as husband and wife. Likely in recognition of these bittersweet circumstances, Johnny Ray bought Joyce some candy at one of the stores on the path of their nightly stroll. The two made their way to a retaining wall on the beach and began to share the candy as they took in the nighttime beauty of the Pacific Ocean.

Sadly, a gunman hidden in a make-shift sniper's nest put a permanent end to newlywed's hopes and dreams. Both Johnny Ray and Joyce were shot with .22 long-rifle, hollow-point bullets. Once incapacitated, the gunman approached and shot each in the head at point-blank range. Joyce died quickly. Remarkably, Johnny Ray held on two to three hours before succumbing to his wounds.

From early on, it was well documented that the killer took Johnny Ray's wallet. However, in doing some research recently, I came across a tidbit that may have some meaningful implications. Specifically, the February 23, 1964 San Diego Union newspaper had an article which included the following two paragraphs: 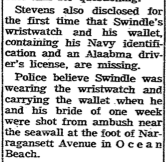 The killer almost certainly took the sailor's wristwatch. But that's not all. The situation becomes even more interesting when we consider how Johnny Ray spent the last day of his life: he was painting for several hours. In particular, he went to his landlady and asked if there was anything he could do to earn some extra money. She put him to work painting an apartment.

So, are there any references to paint-splattered watches in the remainder of the extended Zodiac crimes (the canonical Zodiac crimes plus the Southern California murders)? Indeed there are. In the very next crime, i.e. the murder of Cheri Jo Bates some two years and nine months later, investigators found a watch at the crime scene--a watch which is documented as having paint on it. The watch band was broken and most people, understandably, believe it was worn by the perpetrator and torn off by Cheri Jo when she fiercely fought back against her attacker. But, what if this watch was never owned by the killer? Rather, what if he left it at the crime scene specifically to confuse the investigation?"

I just sent sent Ophion1031 a email about the Swindel's murder. And then came here to see if there was a thread on them. The idea that Johnnys watch was taken and had paint spots on it, could very well be the one found at Cheri Jo's crime scene. I have more to add to this story. On Sept 25th 1990 a postcard was sent to VTH with a cipher. My friend Lyndon Lafferty who was a CHP officer in Vallejo. may have solved that cipher.He gave me some papers showing more about the postcard. He described it as having driftwood on "Ocean Beach". In the mean time someone named Rubishaw found what he believed to be a copy of that card because it had all of the correct words as he knew them, which was Sandy Beaches- California. He posted it and of course I had to hunt for that beach, I found which beach that was on his card, it was Carmel Beach in Monterey County Ca. Then I found the notes that Lyndon gave me and I realized what Rubishaw found was one of a series and the correct one is "Ocean Beach". I knew about the Swindel case and went to San Diego to see the crime scene, I read all about the case. So I believe that the postcard Zodiac sent to VTH was a clue to Zodiac being the killer of John and Joyce Swindel. Now I am hunting for a copy of the postcard that shows "Ocean Beach" San Diego Ca. I read one of the articles above where the reporter said they were killed at Mission Beach, that is wrong! If  anyone want to see more about the postcard its on Zodiackiller.com under Celebrity Cypher ( That is how Zodiac spelled cipher)