"When I write the true ending it will shake the Earth!"

"When I write the true ending it will shake the Earth!"

Whether Bettye actually wrote the message is unclear and it could just as easily be a hoax but for this post, let's assume it's genuinely by the hand of Bettye harden, and the implications that comment brings with it.

Here's a copy of the book message: 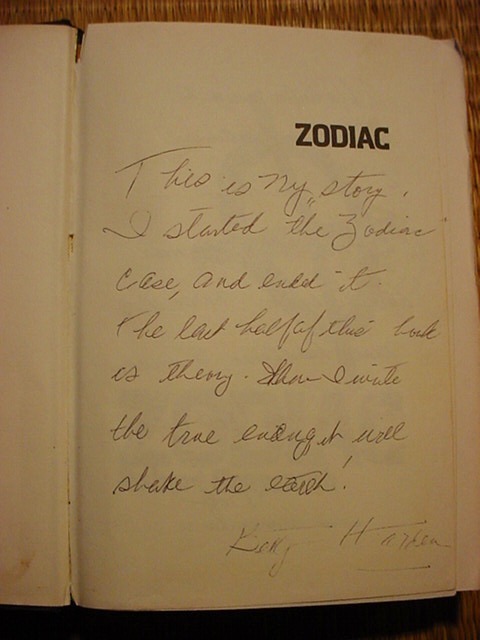 If Bettye did write that then We can assume that in Her reference to Her having 'Started the Zodiac Case', She may simply have been alluding to Her and Her Husband, Don G. Harden, cracking the three part 408 cipher that was the initial communication sent by The Man who later became known by His self Titled Moniker: Zodiac.  But how can We explain the next statement after this of "And I ended it!" There has been no 'End' in terms of resolution to the case at least not publically but the comments author seems to imply that She (if it is Bettye writing) known what the resolution to this case is, and has the key to unlocking what is to the rest of us, A mystery. "

"When I write the true ending it will shake the Earth!" Declares Bettye.

It's alwas struck that the comments made by the Harens Daughter are, at the very least very odd,  at worst or most, incriminating. She claimed Her Mother Bettye felt a connection to the personality of the killer, saying She believed She knew His mind and how He thought and His motives for killing. The Hardens Daughter explained this as Her Mother being psychic and this is how and why, she claimed, Her and Her Father Don arrived at the Cipher's first word/letter will be 'I' because Bettye psychically got that from tuning in to 'His' Mind.

Her Father Don, however, used more Earthly and conventional methods to attack the Zodiac 408 Cipher by reaching to His book shelf for His copy of: 'Fletcher Pratt's: Secret and Urgent!'