Carpenter supposedly "confessed" to other inmates that he was the Zodiac Killer. He was investigated and cleared by police.


David Joseph Carpenter (born May 6, 1930), aka the Trailside Killer, is an American serial killer known for stalking and murdering women on hiking trails near San Francisco, California.

Born and raised in San Francisco, Carpenter was physically abused as a child by his alcoholic father and domineering mother. As a boy, he suffered a severe stutter and a bed-wetting problem, and tortured animals. At 17, he was incarcerated for molesting two of his cousins.

He married in 1955, a union that produced three children.

Carpenter committed an attempted murder in 1960, for which he spent seven years in prison. In 1970, he was arrested for kidnapping, and spent a further seven years behind bars. After his release, he was a suspect in the notorious Zodiac murders, although he was eventually cleared.

From 1979-1980, he raped and murdered five women and was suspected of killing at least two others. He was eventually arrested and found guilty of the murders, for which he was sentenced to die in the gas chamber. He remains on San Quentin's death row.

In December 2009, San Fracisco police reexamined evidence from the October 21, 1979 murder of Mary Frances Bennett. Bennett, 23 years old at the time of her murder, had been jogging at Lands End, San Francisco when she was attacked and stabbed to death. A DNA sample obtained from the evidence was matched to Carpenter through state Department of Justice files. In February 2010, San Francisco police confirmed the match with a recently obtained sample from Carpenter.

David Carpenter was a severe stutterer with an insatiable sex drive and a propensity for violence though, by serial killer standards, he appears to have been a late bloomer. His first serious violent offense ocurred in 1960 when, at the age of 33, he was arrested and sentenced to 14 years in prison for attacking a woman with a hammer and knife. He spent a little more than half of that sentence behind bars, earning a return trip to prison in 1970 for kidnapping and was released 1977. Between his two extended prison stays he was a major suspect in the famous Zodiac murders but was eventually cleared.

Carpenter may have proved not to be the Zodiac but it wasn't long before he was claiming lives of his own. His first victim may have been an aquaintance, Anne Kelly Menjivar, who disappeared from her home in late 1979 and was found dead in Mt. Tamalpais Park, located in the San Francisco Bay area. He death was not linked to Carpenter until after his arrest. Mt. Tamalpais was also the scene of the next three murders.

In August of 1979 Edda Kane disappeared from the park while hiking. She was found shot in the back of the head in a kneeling position. Then in March of 1980 Barbera Schwartz, 23, was found in the same position as Kane, but died of stab wounds to the chest. 26-year-old Anne Alderson was next in October when she was found shot in the head after vanishing during a jog. The police had what appeared to be an excellent suspect soon afterward when a man who lived with his mother and brother on Mt. Tamalpais was caught after killing his two family members and hiding in the surrounding woods for a few days. He was soon cleared of suspicion and the "Trailside Killer" continued his killings.

Carpenter made his mark in the media on November 29, 1980. Two days earlier Shawna May, 25, disappeared from Point Reyes Park while hiking. Two days later she was found dead from a bullet to the head. This time however she was joined by Diane O'Connell, 22, who had disappeared about a month earlier form the park. She was found beside May's shallow grave, also shot in the head.

As if that wasn't enough, later in the day two more bodies were found in Point Reyes , both victims of the mysterious killer. Cynthia Moreland, 18. and Richard Towers, 19, had been killed on the same October weekend as Alderson in October. The media frenzy focused on the case with the discovery of four bodies in one day was almost expected and near-panic ensued.

In March of 1981 Carpenter struck yet again, killing Ellen Hanson in a park near Santa Cruz. Her boyfriend survived, however, and gave police enough of a description to finally release a composite sketch of the suspect.

Parkgoers also told police of a small red car that was in the area duing the attack. Armed with this info all the cops needed was a break and they go one on May 1, 1981, although it would be at the expense of one more victim. 20-year-old Heather Scaggs disappeared on her way to the home of Carpenter, who knew her from work and was rumored to have attempted to date the young woman. When police came to his home to question him, they couldn't help but notice his resemblance to the composite sketch of the Trailside Killer and his shiny red Fiat, a dead-ringer for the car seen near the Hanson murder scene. They kept Carpenter under surveillance until Scaggs' body turned up in Big Basin State Park and he was finally arrested.

Carpenter had a history of sex crimes. An aquaintance admitted selling the ex-con a .45 which was used in several of the killings, though Carpenter had gotten rid of it by the time of his arrest. A .38 another man had bought from Carpenter proved to be the gun used in the last two killings. It was an open-and-shut case and on July 6, 1984, the "Trailside Killer" was sentenced to die in the gas chamber for the Hansen and Scaggs murders. He was later tried and convicted of murder in five of the other slayings. 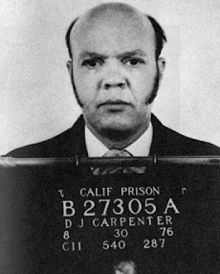 One of his victims, Mary Frances Bennett, was from Deer Lodge, MT.

Similar topics
» David Cortes Sculpting toys video
» David Cnudde - what shall we do if he get elected???
» Dr. James David Manning says "thank you for turning our world over to these dictators and tyrants
» more facts of David Archuleta
» Is David Archuleta left handed?