Did SFPD ever tell you if they thought the one about Graysmith was actually Zodiac or not? Sorry if I have asked that before or if you have answered that already on here.

I don't have a hard time believing there are/were 4 of them. In fact, I think 4 is the number I would have guessed if I had to.... 2 killers (1 killer shot Stine, the other killer did the other murders), 1 person to write the letters, 1 person to plan everything (ciphers, bomb diagrams etc.) and then the 4th person I think was probably a cop or gov't agent of some sort. Basically, someone who could provide some protection (tamper with evidence, set up an alibi, whatever would be needed).

The handwriting expert at Oakland PD was the one who said it was too much like the Zodiac's writing to be from him. SFPD didn't think it looked like Zodiac. There have been many more that believe it looked like a match.
I don't have much faith in the so called "experts",because they went against Sherwood Morrill when he said the two that they thought were not from Zodiac, were a match. Sherwood was the best of the best I believe.

Funny how at first the experts felt those two letters were indeed from Zodiac. Then when Toschi was suspected of writing, they all of a sudden changed their minds?

It looked too much like Zodiac's writing to be his? That is a head scratcher. I never had much faith in Sherwood Morrill because I didn't see how he could say that the Bates letters were a 100% match to the Zodiac letters. I'm no handwriting expert or anything, but I just don't see it.

I understand a little about what the experts look for in the handwriting. Zodiac spaced his lettering in a odd way. Like when he wrote a capitol F it was done in three strokes, like he did with the letter K , his E was in four strokes. They can also tell by the pressure used.
He would cramp some of the lettering together, then leave a unusual space with another part of the word. Like the April 30th 67 envelope. Not only did he use over postage, but he wrote "pol" then space and "ice", also the odd spacing in the other words and his downward writing. I have seen his child like writing and most of the Bates writing was very child like.I have also seen the fancy Z before, like what was on the letter to Joseph Bates. It was written that way on my car along with 7-4-1969. That was on my car before Graysmith's Z book came out.There are things about Zodiac that we don't know, that only the detectives and FBI know. They have to keep somethings from us. I was lucky to know that Zodiac sealed his envelopes in a way, that they knew when he sent letters.I wasn't told what that was, but it came from one of the top detectives in the case, so I have no reason to doubt what he told me. I have no idea if the Bates envelopes had that seal or not?

Yeah, there is a lot that goes into handwriting analysis. I did a little bit of research on Michelle Dresbold, and I really like the work she has done in her career. I think she is really good at her job, and I would love for her to be an "official" Zodiac handwriting expert if one were needed.

I wonder if she would be willing to compare the Bates letters to the letters sent to Jack Ruby. 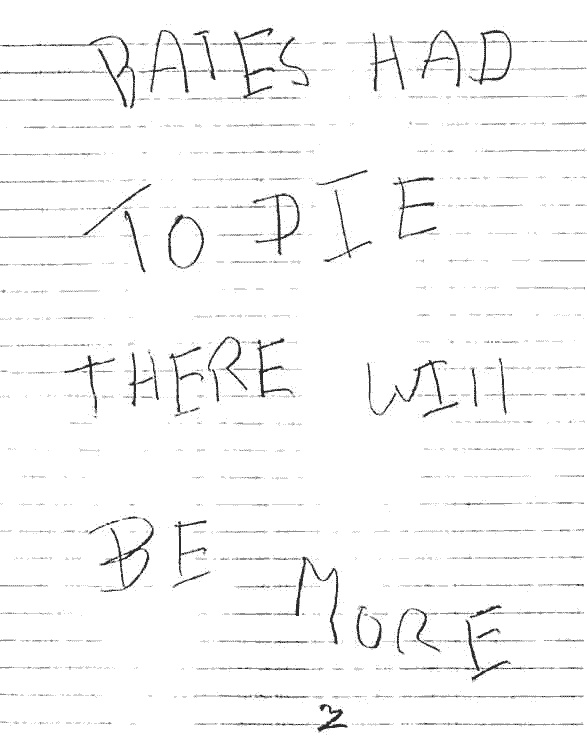 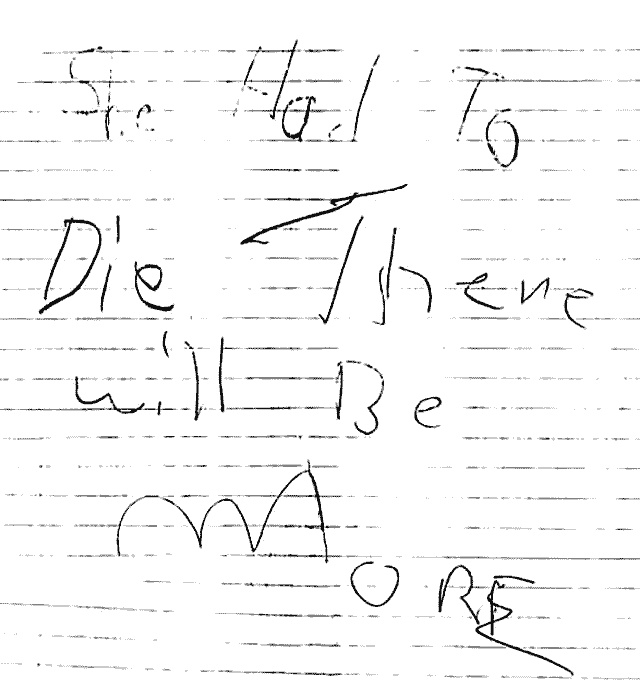 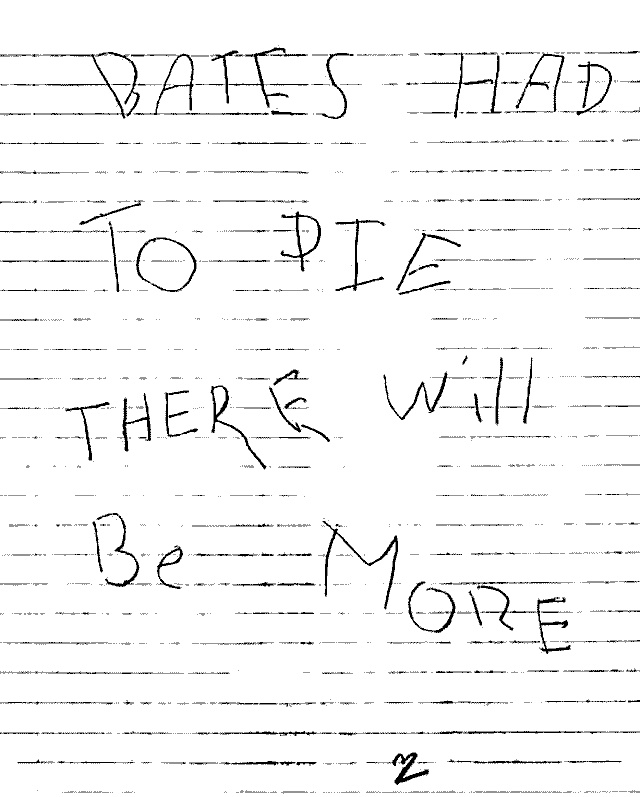 
At some point I will post some of Manalli and Kaczynski's handwriting as well as others, but those are the two suspects whose handwriting is closest to the Zodiac letters if you ask me.

There are many similarities, the s is very different though. If this were Z's writing, he may have tried to disguise it for what ever reason, because some of it loos like it was written by a left handed person. It was leaning towards the left. Zodiac was right handed and leaned towards the right. I am pretty sure that I have seen some Z writing where he has mixed cursive with his printing like I see in the Ruby letter. The P in publicity , looks somewhat like the Patricia Hautz envelope.
This is the first time I have ever seen the Ruby letter, thanks.

The Bates letters are leaning towards the left.
Being it is believed that Zodiac is ambidextrous that would fit.
Many times Zodiac's letter B was done like the number 13, like in the Ruby letter.
The only letter completely off is the s.The lower half of Z's S's are curved upward, the Ruby S's lower half are curved downward. Perhaps you can send all of the samples to Dresbold,she might like to see them? It would be interesting to see if she picks one or a few as a match to Zodiac?

Yeah the 's' is definitely off. I contacted Michelle Dresbold to see if she would take a look for me. I think there is a good chance that the Bates and Ruby letters could be a match, but I don't know about them matching the Zodiac letters. I don't know if Rand was able to ever verify who sent the Ruby letters, but they are postmarked Los Angeles and he believed it was someone from the Minutemen. I was thinking it could be Dennis Patrick Mower, but the only handwriting I have on him is a signature.

Have you tried to get a copy of his ss application? I know that Morf has done that a few times and got samples that way. I don't know anything about Dennis P Mower or where he lived, but if he lived with in 50 miles of me, I can try to get his writing for you?

Mower lived in Hollywood until I think the mid or late 70's when he moved to San Fran. I think that is right but I would have to look again. I have no idea how to try to get a copy of an SSN application. I would imagine he applied while he still lived in L.A.

I looked and Mower lived in the Los Angeles area until the summer of 1980 when he move to S.F., so I'm sure he would have done the SSN app from L.A. county. I was thinking of doing an FOIA request on him, but I don't know if it would be a waste of time or not. I have already found a good amount of FBI files on him, not sure if they would have anything else. He was 'tipping off' the FBI in the earlier Minutemen days, or so the FBI thought. What he was really doing was feeding them false information, but that is another story and is all posted on the Mower thread already.

As far as his handwriting, the signature is all I have right now, as I mentioned before...

That is from the early 70's. I guess the "M" looks somewhat interesting when compared to this "M" from one of the Bates letters...

They don't necessarily look alike, but maybe a little bit? They both go up quite a bit before dropping down for the last line of the "M."

He seems to be right handed. Giving false information to the FBI, I would think should be against the law?

sandy betts wrote:He seems to be right handed. Giving false information to the FBI, I would think should be against the law?

Yeah, but that was what the Minutemen did. They even went as far as planting members into organizations like the Weather Underground just to keep tabs on them. I'm not sure if ever successfully had anyone planted into the CIA or FBI, but I know those agencies had men who had joined the Minutemen, some even became leaders of the group.

I do like the Minutemen maybe being behind the Z murders but maybe just 1 or 2 of the Minutemen and not the whole group. That is something I just can't see. I pretty much think Houghton was out of the picture by that time though. Any pictures of Dennis Mower from around '69 or '70?

This is the DB COOPER vs. Zodiac Handwriting Analysis and Matching Lettering

It is clearly the same codemaker......but clearly an agent that was sent to hijack the plane.......

Each letter holds this theme used to try to inspire copycats......

These copycats were then used to take the fall for the original crimes as the suspicion was enough to make these men culpable through coincidental and speculative evidence.

Notice how the FBI just dropped the case......

Now I can just wrap them all up together for a lump sum.

Do you have a favorite DB suspect? Anyone who could have been part of the group you have been talking about or someone they could have sent to do their dirty work? Maybe Bob Rackstraw?

I believe that he was tightly associated with Chauncey Holt, from the Los Angeles Stamp and Stationary Company.

The cards and letters were either crafted there or from stationary, envelopes, and stamps from their stocks....

Chauncey Holt was a master forger and was able to craft the Secret Service ID's for the assassins and smugglers there in Daley that day....

After JFK they decided that it was time to follow the next phase of their operations.....under the directions of Sidney Gottlieb and the splinter cells they ran.

Here's the source of the costume that most people think is the Zodiac's original inspiration for his own.

Funny how Sanders is now tied into this all....

I didn't know Holt worked for the Los Angeles Stamp and Stationary Company either. I'd bet that the JFK assassination was the beginning. These people realized "shit we just got away with MURDERING A PRESIDENT, we can do whatever the hell we want from now on." Assuming your theory is correct, of course.