The victim was found dead at 6:30 am, December 1, 1948, under a street lamp at Somerton Beach in Australia. And with that, we have exhausted everything we know about the man. It's the things we don't know that have been baffling authorities ever since. Including the meaning of the apparently uncrackable secret code he left behind. 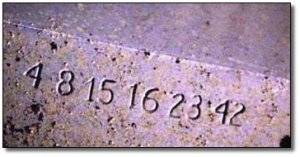 But more on that in a moment. Things first started to lurch towards the creepy when police noticed that all his clothes' identification marks had been removed. They were eventually and painstakingly able to place a jacket to America, which was strange because his dental records and fingerprints didn't match anyone who'd ever lived there... or anywhere else in the world. It was like the guy had never existed.

So the cops must have been half expecting it when the coroner returned with the cause of death: "Sudden, acute onset of damned if I know." The autopsy revealed exceptional health, a half-digested pasty in his stomach, and congestion in his brain and stomach that would have been consistent with poisoning if, you know, they'd found even a trace of poison anywhere in his body. For good measure, his spleen was three times too big.

Every breakthrough seemed to increase the mystery. They discovered a brown suitcase that had apparently belonged to the man, but that only revealed more clothes with the tags removed, and the aforementioned jacket.

The cops also discovered a secret pocket in the man's pants, which contained a scrap of paper with the words "Tamam Shud" printed on it (the words meaning "ended" or "finished").

The text looked like it was a scrap torn from a book. And it turned out it was; from a collection of poems called The Rubaiyat of Omar Khayyam. And not just any Rubaiyat, but a specific translation, and an extremely rare one at that.

This was pointed out after police did an Australia-wide search as if the book was the ark of the goddamn covenant, presumably braving Indiana Jones-esque temples and solving ancient aboriginal riddles before some dude mentioned he found a copy of that exact book in the back seat of his car right around the time and location of death.

Sure enough, "Tamam Shud" was missing from the books pages. Instead of a library card with the dead man's name printed on it or something even a little bit helpful, the book contained the clue that would take the mystery from "spooky" to "officially starting to piss us off."

In the back of the book, the cops found this code: 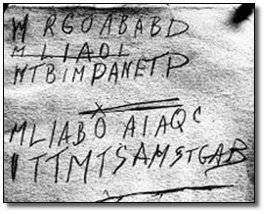 Was the code the result of a disturbed mind, or chronic boredom, perhaps? Turns out, no. The most recent attempt to solve the case found the letters aren't random, just some mysterious cipher nobody was familiar with. Can you solve it? If so, you're about to be famous, considering people have been trying for more than 60 years.

Not all that unsimilar to the Zodiac case only of course there is tons more info and clues in the Z case. This one is really interesting though. I will do some studying up on it when i get a chance.

One of the more interesting cases that has been posted here.