A Zodiac horoscope named THE ZODIAC

A Zodiac horoscope named THE ZODIAC

That is interesting. Makes ya wonder if Z was originally from Kansas and may have seen this.

I think I have asked you before, but are you familiar with the guy who was a suspect in the Lompoc murder that some believe was the work of Z? The one that was a "Sandy" suspect. Robert Bell I think was his name. I think he moved to Kansas sometime in the early 70's and has lived there ever since.

vaugely.... I looked at the Sandy pic and read the article
is there a pic of this R Bell? or address

ophion1031 wrote:I think I have asked you before, but are you familiar with the guy who was a suspect in the Lompoc murder that some believe was the work of Z? The one that was a "Sandy" suspect. Robert Bell I think was his name. I think he moved to Kansas sometime in the early 70's and has lived there ever since.

yeah I did something with it ,but can't remember exactly what , maybe at the zks site . they gave an address and one day over that way I tried to find it but seems the house numbers did not match , could be he is N of the river i would try again and take a pic
BTW I called and no archiving at the examiner here only some in the late 70's to mid eight's

Robert Bell was the guys name, the Sandy suspect,, and I do think it was him but not sold on him being the murderer of Domingo and Edwards. I think he moved to Kansas prior to the Zodiac murders didn't he?

Robert Bell was just one of the suspects in the Domingos - Edwards case. He was very young and was eliminated quickly because his alibi checked out. There was never any proof that Sandy was Robert Bell, they never found Sandy. I do not believe that that was his real name, only a nickname , because of his light hair.The interesting thing about Sandy is that he laughed when he stabbed someone.The killer at Lake Berryessa did the same thing while stabbing Cecelia. What a older looking Sandy could look like now would be a lot like the actor Richard Carlson. There is a story about someone looking like that in Vallejo a few yrs back. Stella Borges nephew is Al Losado. He was at Mac Donald's early one morning, eating breakfast. When an older man asked if he could join Al? Al assumed the man was a friend of his friend Lyndon Lafferty ( The CHP officer who had a run in with who could have been Zodiac). The man wanted to know if Al had heard anything new about Zodiac? He told Al that he had been away for a long time living in Reno NV. but was back in Vallejo now. The man ordered a salad for breakfast. When Al told me that I got a chill, because my eldest daughter knew what my stalker looked like, because he was also following her. She told me she walked into a restaurant in Antioch and saw him eating a salad for breakfast, then after that he ordered scrambled eggs. Pretty odd coincidence. Of course I think they had to be the same man.My suspect and Sandy hold their cigarettes the exact same way.( Right at the web of his finger)
His fingers have a yellow /brown stain from holding his cigarette like that. His teeth at that time ( 1988) looked like crooked co co pops. The worse stained teeth I have ever seen! The only person I know who lived in Vallejo and moved to Reno, was Bingo Weiser, but he didn't look like Sandy. Bingo had a round face, brown curly hair , pretty stocky about 5 ft 10.I have one suspect who lived in Oakland who moved to Reno, his last name is Gentry. My RH has never left the bay area as far as I can tell.

Damn, sounds like Al actually had breakfast with Zodiac or one of the persons involved in the murders. Any idea around what year this may have been?

There is always the possibility that those two kids made up 'Sandy' but I think they were telling the truth for some reason. I always thought there was something odd about Robert Bell, maybe the expression on his face in photo from the newspaper article of his arrest. That description of Bingo Weiser (great name!) sounds like Zodiac, but doesn't match the 'Sandy' description.

Al told me it was in April or May 2015. The man could very well be Zodiac.
Yes Bingo did look like the description of Zodiac. I wish I would have paid more attention to the things he told me about the murder at Lake Herman rd. He came in to talk to me almost every day. He didn't date anyone other than the sheep he "took care" of, if you know what I mean? I don't remember him talking in a formal way like Zodiac did. Do you have a link to the newspaper article that showed Robert Bell?

Oh, wow... I was thinking that breakfast "meeting" would have been a long time ago. Makes it more interesting that it was just a couple years ago. 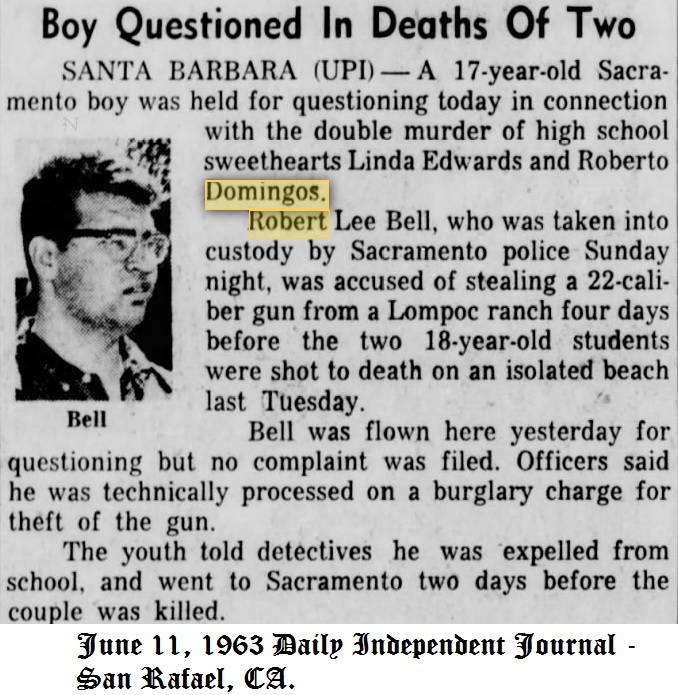 Someone claiming to be Bell's son posted on here a while back saying that his father was not Zodiac, I think. I looked for that post but cannot find it now.

Thanks, He looks a lot like the guy I got away from in Vallejo 1968, but younger. The man I saw was about 30 yrs old in 68 and I don't remember if he had glasses or not?
In 1988 when he came into my work dressed as a old woman his glasses weren't on. But all of the other times I saw him he had glasses.
Al told me the man he had breakfast with didn't have glasses, that his eyes were blue/gray, bushy -wavy thick salt and pepper hair. Bushy eye brows, slight wrinkles on face. 65to 75 yrs old,165 to 175 lbs, 5 ft 8 or 9. Every thing fits one of my suspects, except his eyes are light hazel. My RH suspect has blue eyes , but looks very different than the drawing. Sometimes people see hazel as green, blue. Pam H. thought our poi had blue eyes and that my eyes were blue, when in fact both of us have hazel eyes. The composite that Al drew of that man, looks like a older Sandy. His drawing shows lots of wrinkles on the mans face. I believe Al is telling the truth, because if it were made up , he would have described the man like his suspect William J Grant.Al also told me about a man who was tail gating him on Lake Herman rd on 9-17-15, he showed me the type of hat that the man wore and it is like one of the hats my suspect has worn. The hat was large like a rangers hat.My poi wares many different hats, base ball caps to cowboy hats. The picture I took of him in 1990 he wasn't wearing a hat , looked like he just got off of a construction job and had gray dust/ powder like concrete dust on his hands , knees, boots.Remember the Donna Lass card that showed men working construction? Maybe that was a clue?

Bell looks interesting in that photo.widows peak,round face,glasses.his hair also seems wavy/curly.also heavy,overweight.not saying I think he's zodiac,but he has things in common with both the berryessa description and with the stine composite.I know many people would fit those descriptions (I actually look like the stine sketch,with my 60s horn rims and crewcut!),but at least this guy was a suspect in a double murder for a minute or two

Bell was only 17 in that photo, would have been 22 in 1968. He looks older than 17 there, but kinda hard to tell. I'm pretty sure he was in the Army at some point in the late 60's and may not have even been in California, but I'm not completely sure. Still an interesting guy.

Egan, I agree... and he wasn't just a suspect in a double-murder, it was a POSSIBLE Zodiac double-murder. I'm kinda 50-50 on that myself, but that attack was pretty similar to Lake Berryessa, so it is definitely possible.

The man who claimed to be Bell's son wrote this "If Robert bell was alive today he would be in stitches. He is not the Kansas man. My father the real Robert bell moved to Spokane WA in 1983 and passed in may 1992 .That solves the where is Robert bell debate . thanks"

Here is the suspect's Zodiac chart

Another major hint in the whole puzzle's literal terminology 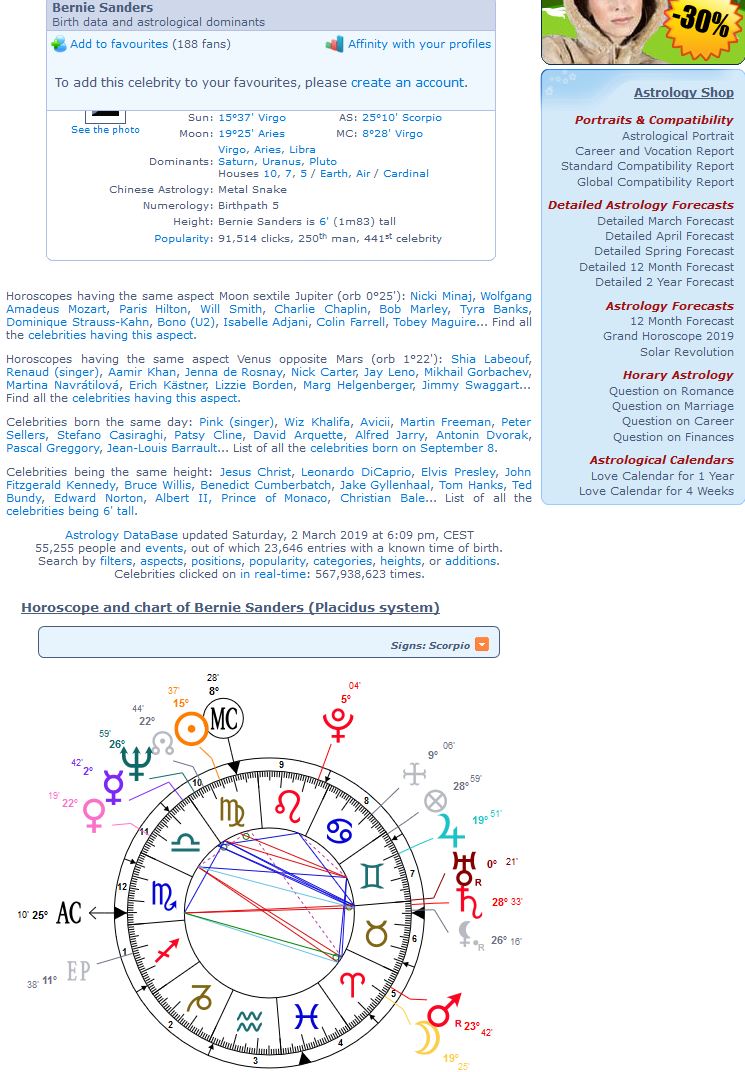 Similar topics
» ZODIAC TIPS
» Zodiac quests string
» How do you get Zodiac mode?
» Zodiac Quests
» Help! Run out of Shatters for Zodiac