Ironsides was arguably the top TV crime drama in 68-69 ,. A smart scripted TV  show too
The opening intro of it was a slow camera shot panning most of the old S F neighborhoods
I would bet Z tuned in to see that part of the show if not more ...if you can find it on still it is worth a look to see 68-69 SF  in color ,I wonder where the camera was placed

There was a feb 27,69 episode involving a cab driver shooting

Good find!! I'm going to see if I can find any episodes, or maybe some seasons on DVD.

I typed in "Ironsides 1969" to the ebay search function, and this is the first thing that pops up.....

Here are some DVD's of the show. I'm going to be ordering some soon... 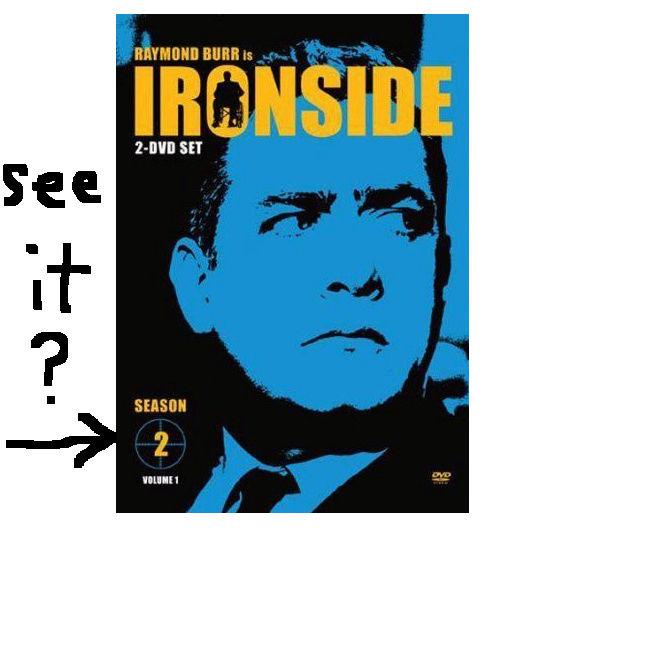 The plot ...I read was a  cop Sgt. moonlighting as a cab driver in San Francisco ..of course , shoots/kills  a customer
I wonder how much he looked like P Stine?
Yeah the cross-hair circle , ironsides was sniped on the 1st show
Police used to use a cab as a undercover car
perhaps zodiac knew it and was trying to shoot a uncover cop ,but got Stine

This is another reason to wonder if Z was in the film industry - an actor, writer, director, producer, behind-the-scenes guy... or whatever. In the 8 or 9 years that the show was around, they had 45 people who had directed at least one episode, and they had probably around 100 people who got a credit as a writer. The amount of people who got an acting credit on the show is way up there, maybe even over 1,000. That is a lot of people to research. I could see Zodiac being a film maker, thinking he is writing the ultimate real life movie and outsmarting everyone.

Raymond Burr aka "Ironside" does look a little like the Stine sketch... 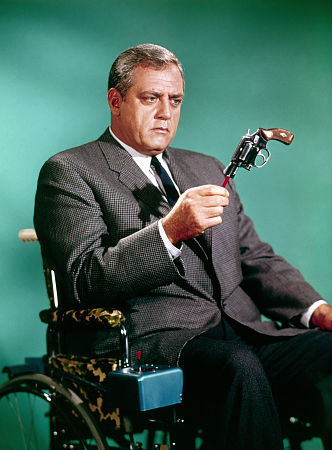 He's heavyset, has a bit of a round face and the widow's peak.


Elizabeth Baur, who played Officer Fran Belding, was also in the 1968 film "The Boston Strangler."

Here is something interesting... there was a Ralph Ferrin who was an assistant director on 1 episodes on the show, in 1968.

Here are some people listed in the cast & crew that I plan to research:

Ron Hayes (actor) 2/26/1929 - 10/1/2004. Was 6'2" (maybe too tall). Birth name Ronald G. Hayes. Ron attended Stanford University from 1949-1952 and graduated with a degree in foreign relations. After graduating from Stanford, Ron spent a year and a half as a Marine Lt. in Korea during the war. After the Korean War, Ron settled in the San Jose, CA area and worked for KSJO radio. In 1957 he moved with his wife, Joan, and three children, Vanessa, Peter, and Heidi, to Hollywood to begin an acting career. Ron was a lifelong environmental activist and was one of the principal founders of Earth Day, helping launch the first Earth Day celebration in 1970. Was not living in the Bay Area in the late 60's.

that crosshair is interesting. its on the dvd but did they use it back then do you know?

Yes EricX
There was a scope image that searched and then found Ironsides and then he was shot ,it would be like catnip to zodiac IMO there were 4? different openings to the show

AND the show was primarily filmed in San Francisco, although some parts were filmed at Universal Studios in Hollywood. It is very possible that this show could have had a slight influence on Zodiac and, like I said before, maybe he even worked on the show.

maybe he was a extra in a scene ,or always tried to get on it . anyone could do that . may have wanted an extra stocky person to compliment Raymond Burr and make him look normal
but this was the top rated show, NBC?
had the thursday nite time slot 7:30 -8:30 here

I will be ordering the DVD next week and watch to see if anything grabs my attention.

I see a website watchseriesfree.com that shows they have it

Awesome! Thanks for the tip... gonna see if I can check it out for free, but we have a lot of restrictions on the computers here at work so I'm guessing it won't work.

Yep, just as I thought... can't watch. Oh well, I guess I can wait until I order the DVD's.

Maybe z ,a fan of the show wanted to see his killings portrayed on the show

That could very well be!

Some one should grab that slow pan of 1968 ? San Francisco ,it lasts 30 sec.? and use it on their zodiac site

inever even heard of this show before this thread. was it popular back then?

Saw a johnny carson with raymond burr from 76, the other day, he talked that he had a cabin out in the woods Cal. ? where he spent alot of his spare time
Yes eric x , ...this show started dinners watching TV . young kids not allowed ,many couples , adults watched perry mason with their 1st TV
IT was on reg. TV here ,but maybe gone now ..
darn wanted to see the cab shooting show

Did or were you able to watch the episode yet ophion?